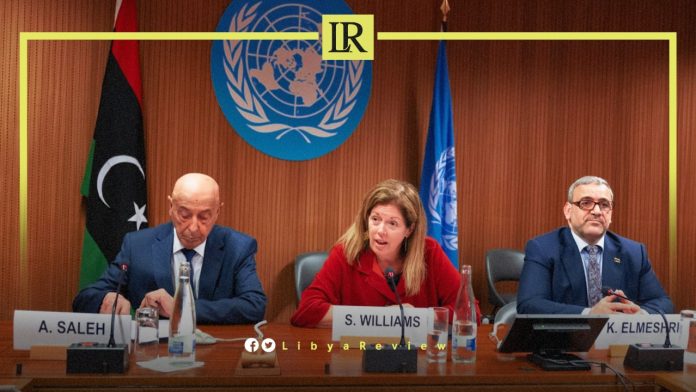 Talks between rival Libyan institutions in Geneva ended on Thursday without progress to move towards elections, the United Nations Libya Advisor, Stephanie Williams said in a statement

“Despite the progress in this week’s negotiations between the heads of the respective chambers, disagreement persists on the eligibility requirements for the candidates in the first Presidential elections,” Williams said.

She added that both sides reached an “unprecedented consensus” on several long-standing issues. This includes the designation of the headquarters and distribution of seats for both chambers, and the division of responsibilities between the President, Prime Minister, cabinet, and local government.

They also reached a consensus on decentralization, including the number of governorates and their powers; revenue allocation mechanisms for the different levels of government; and increased representation for cultural components
She urged both sides to “overcome the pending disagreement as soon as possible”.

Elections, originally set for December last year, were meant to cap an UN-led peace process following the end of the last major round of violence in 2020.

But the vote never took place due to several contentious candidacies and deep disagreements, over the polls’ legal basis.

A week of talks earlier this month in Cairo between the HCS and the Parliament ended without a breakthrough.

Williams said that following the talks in Geneva and Cairo, several points had been agreed upon.

“I urge the two chambers to overcome the pending disagreement as soon as possible,” said Williams, urging “calm and stability”.

She said the UN would remain available to help reach an agreement to end the country’s long transition period.

The prospect of elections appears as distant as ever since the Parliament, elected in 2014, appointed a rival government to replace that of interim Prime Minister Abdel-Hamid Dbaiba arguing that his mandate has expired.