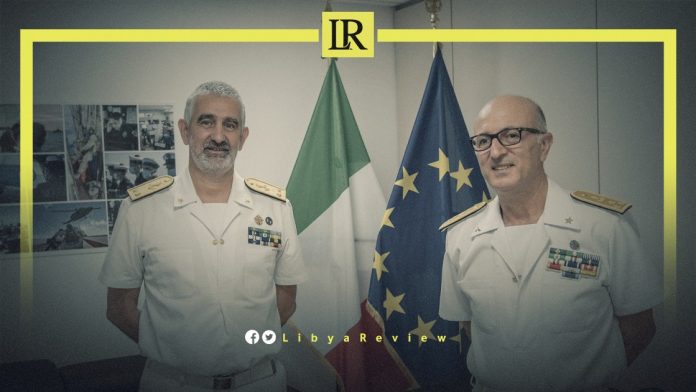 On Saturday, the Italian Coast Guard agreed to deploy a liaison officer to the command of the European Union’s Operation IRINI. This is in charge of overseeing the implementation of the arms embargo on Libya.

This came following a meeting between the visiting Chief of the Italian Coast Guard, Vice Admiral Nicola Carlone, and the Commander of the operation, Stefano Turchetto.

Carlone was briefed on the capabilities, personnel, and units assigned by the European states to the Operation, its state of play, and its future.

“It was a fruitful exchange of views on the current situation in the central Mediterranean, and the existing collaboration between the two institutions sharing a large part of respective areas of operation,” IRINI’s statement read.

“The Italian Coast Guard assigned a Liaison Officer to the IRINI Headquarters, assuring a reliable and prompt point of contact in case of interactions between Coast Guard Patrol Boats, and ENFM operating at sea,” it added. “Admiral Carlone expressed his gratitude for the support and appreciation for the professionalism of IRINI’s crews.”

On Friday, the Italian Senate approved a decree to refinance the Libyan Coast Guard, after the House Foreign Affairs and Defense Committees voted in favour of the decision for six months.

The decree provided for “assistance to the Libyan institutions responsible for monitoring the maritime borders, to gradually make them independent in their technical and operational management.” It has planned to allocate €11 million and 884 thousand euros for Libya’s Coast Guards.

According to Italy’s Aki news agency, the Italian lawmaker for the Forza Italia party, Maria Tripodi criticized the Democratic Party’s vote against the decree. She noted that the adoption of the decree came thanks to the votes of the centre-right party.

Tripodi said that the Libyan file deserves special attention, considering that the renewal of the Italian mission in Libya is a measure wanted by Defense Minister Lorenzo Guerini, who belongs to the Democratic Party.