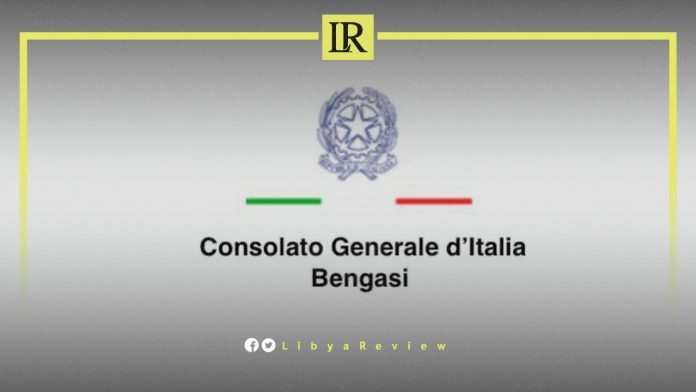 On Thursday, the Italy Embassy in Libya announced that a new Consul General was appointed in the city of Benghazi, to succeed Carlo Batori.

“Consul General Francesco Saverio De Luigi has the pleasure to take up office today in Benghazi, where he will soon visit Head of Protocol and local authorities,” the Embassy said in a tweet.

It also confirmed that the Consulate General is now fully operational, and will cooperate with civil society organisations to strengthen cultural and economic ties between Italy and Libya.

In April 2021, Italy reopened its consulate in Benghazi. It had closed in 2013, after gunmen attempted to attack the Consul on 12 January that year. On 28 April 2021, the Italian Foreign Minister, Luigi Di Maio announced that Italy would be opening an honorary consulate in Sebha, in order to strengthen bilateral relations.

“This is to enhance Libya’s newfound unity, and to ensure the presence of our institutions in Cyrenaica and Fezzan,” Di Maio told lawmakers. “Strengthening our network in Libya will be essential in order to reactivate all projects which were suspended due to the instability in the country, and to launch new ones,” he added.

“Italy’s Embassy in Tripoli was the only diplomatic mission that remained open throughout the decade-long conflict in Libya,” Di Maio noted. “We have also okayed the re-opening of Italy’s foreign trade agency’s office in Tripoli, and the Italian Cultural Institute,” he said.

Orlando affirmed his full support for a political process that leads to stability in Libya and reiterated the concerted local and international efforts.