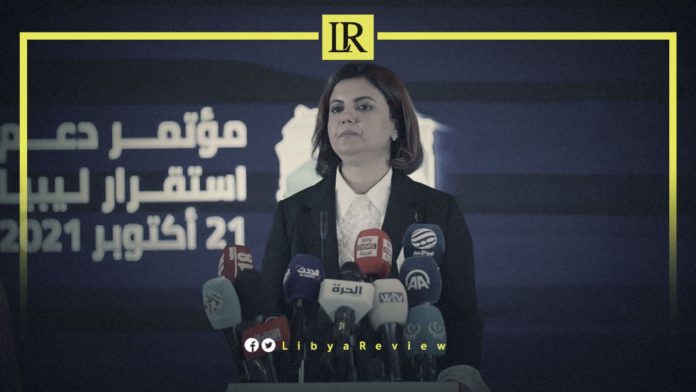 On Thursday, the Libyan Minister of Foreign Affairs and International Cooperation, Najla Al-Mangoush, said that stability would not be achieved in Libya without ensuring full national sovereignty.

In her speech during the Libya Stabilization Conference in Tripoli, Al-Mangoush stressed the country’s need for political stability that guarantees the joint participation of all Libyan in determining the fate of their country.

Delegates from 31 countries and international organisations are participating in the conference, including the United Nations (UN), the European Union (EU), the Arab League (AL), and the African Union (AU).

The Tripoli conference comes two months ahead of planned parliamentary and presidential elections. The elections are scheduled for the 24th of December as part of the political roadmap agreed to by all Libyan parties in a United Nations (UN)-led peace process.

“Libyans choose peace & stability today,” tweeted Libyan Prime Minister Abdelhamid Al-Dbaiba ahead of the conference, a day after the 10-year anniversary of Gaddafi’s death. “Tripoli has healed and regained its symbol as a unified capital. The stability of Libya is the only way to complete building our civilian, security, and military institutions. We are going to elections on time.”

The attendees are discussing an initiative launched by the Libyan interim government entitled “Libya Stabilization.” A document detailing the initiative suggests the creation of an international group that will assist Libya’s transitional government in resolving key issues.

Regional and international help is needed to consolidate a UN-backed ceasefire, ensure withdrawal of mercenaries and foreign figures and unify Libya’s many armed groups under a single command, according to the document.

The conference aims to forge an agreement with all parties on “some permanent mechanism to coordinate efforts in order to solve pending issues,” said Al-Dbaiba in his opening remarks.