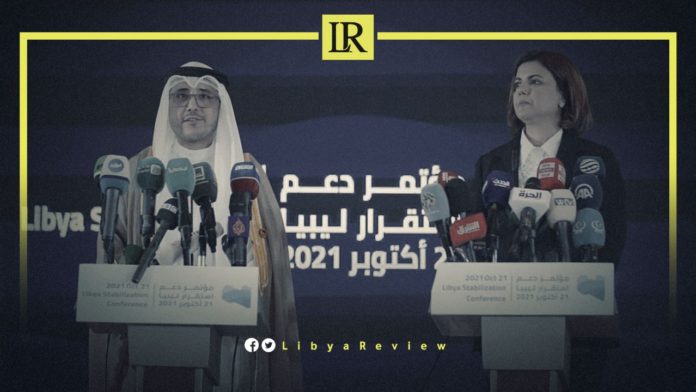 On Thursday, Kuwait Foreign Minister, Sheikh Ahmed Al-Sabah called for the gradual and simultaneous removal of all mercenaries and foreign forces from Libya, stressing the need to ensure the security and stability of Libya.

During his speech at the opening ceremony of the Libya Stabilisation Conference, he affirmed Kuwait’s commitment to the unity and sovereignty of Libya, and its rejection of foreign interference in Libyan affairs.

Libya is hosting an international conference to help secure the stability of the country, ahead of critical presidential elections set to be held in December.

Some 30 international delegates attended the conference, including representatives from the US, Egypt, UAE, Qatar, United Nations, European Union, African Union, and the Arab League.

The Conference is set to ensure the optimal implementation of UN resolutions, and the decisions of the Berlin I and Berlin II Conferences regarding Libya, the minister said.

“Through this initiative, we want Libya to be an arena for positive economic competition, with the aim of creating a national mechanism and a unified international and regional position that is supportive and consistent with this vision,” Libya’s Foreign Minister stated. As well as adding that the goal of the initiative is also to “push the economy forward, and improve the standard of living.”

The UN-backed roadmap called for parliamentary and presidential elections on 24 December, and the removal of all foreign forces and mercenaries from Libya.