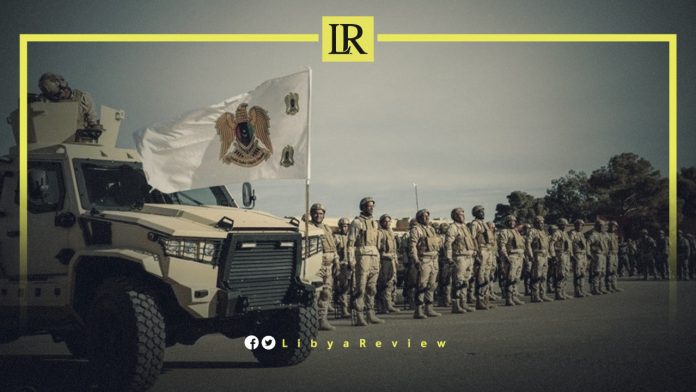 The Libyan National Army (LNA) said that all units, “are ready to strike with an iron fist, anyone who attempts to prejudice the security and stability of Libya.”

The 128th Brigade affirmed that “this readiness comes from our belief in the role of the armed forces, and the responsibility entrusted to us. This requires us to extend security and safety in all the territories of the country.”

It added that the “miracle of the armed forces lies in what the General Command has achieved in reconfiguring and re-arranging units to combat terrorism.”

On Wednesday, the LNA announced that special operations forces had eliminated IS member, and mastermind of the 2014 massacre of Egyptian Christians in Sirte.

The LNA added that the operation took place after a series of investigations, and follow-up of the terrorist, Mahdi Dango in the southern Libyan region of Murzuq.

The statement explained that Dango tried to escape, and had fabricated news of his death. This was after several IS fighters were killed.

The statement pointed out that “Dango is one of the most dangerous terrorist elements, as he is the mastermind and planner of several operations and crimes, including the massacre of the Egyptian Copts.”

The LNA added that they managed to arrest Dungo’s right-hand, Asman Nour during the operation.

Between 30 December 2014 and 3 January 2015, 21 Christian Egyptian migrants were kidnapped in the city of Sirte in central Libya.