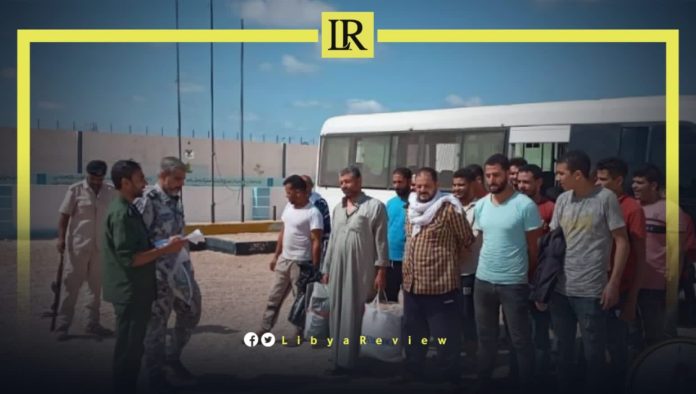 The Office for Combating Illegal Migration-Benghazi Branch (Libya) announced that 18 Egyptian migrants were deported from the Ganfouda Shelter and Deportation Center to Egypt’s Imsaed port on Sunday.

The Office confirmed that eight of the migrants had “infectious diseases, and 10 were referred by the First Sector of the Naval Special Forces.” They were arrested 10 miles northwest of Benghazi.

Last week, Libyan police arrested 287 Egyptian migrants, including children, who were planning to leave Libya for Italy. The migrants were kept in a warehouse south of the coastal city of Tobruk, by human traffickers.

In a live broadcast of Libya News 24, the children stated they were subjected to various forms of violence and beatings, during their stay in the warehouse.

“They took everything from us in the storeroom, phones, money, paper, and everything. They beat and insulted our humanity,” the children said.

The youngest child, Ziad Adawi, 12, from Assiut Governorate said, “I was looking forward to going to Italy to work there, to earn some money.”

Kerilos, 14, said he walked 50 kilometers in the desert on foot, and did not carry food or much money. “They transferred us from car to car, and they didn’t give us food to eat, they just beat us. We sat in the warehouse in Libya for about 6 months. We were over 300 in the warehouse,” he explained.

Another child said “We wanted to travel to Italy to work, any job. My aunt’s children told me to come from Tobruk to Italy. The people who would take us to Italy told us we will spend three days, and then travel.”