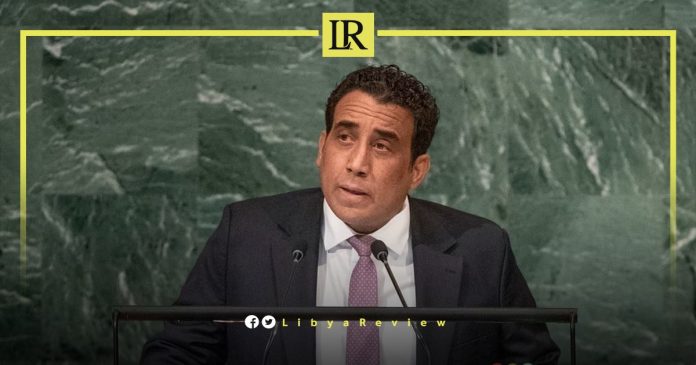 On Wednesday, the Head of the Libyan Presidential Council, Mohamed Al-Mnifi said that as Libya “moves toward building a State of institutions and establishing principles of democracy, it has been through a decade of pain and hope.”

Addressing the 77th session of the UN General Assembly, Al-Mnifi claimed he has upheld his commitment to the Libyan Political Agreement, and as “the supreme political authority” will lead efforts to prepare for a peaceful and democratic transfer of power, through Presidential and Parliamentary elections.

He also thanked the African Union for its cooperation in launching a national reconciliation project. As this represents the most important track for the country, to ensure peace and stability.

Moreover, Al-Mnifi stressed the need for “time limits during dialogues between the Libyan Parliament and the High Council of State (HCS).” He offered to intervene “to get the political process out of its impasse, whenever necessary”.

He praised the UN’s involvement in Libya, and envisioned an active role through the country’s new leadership. As well as urging it to “seriously work to support comprehensive national solutions to the political impasse,” noting that it “has almost undermined the political achievements gained through the UN-sponsored Libyan Political Dialogue Forum.”

The Libyan leader stated that “proxy wars and conflicting visions for a solution in Libya are preventing a national option from being formed. Negative international interventions are still charting paths of ‘contradictory solutions’ that could push Libya into armed confrontations, and lead to rigid political positions that bar approaches to bridging gaps and building partnerships in the country.”

He maintained that the Presidential Council “supports every effort to resume oil and gas production throughout all regions of the country.” As well as its “keenness for transparent and fair oil revenue management to keep public money away from the political conflict, and ensure, without political or geographical discrimination, that it benefits all Libyans.”

The President expressed his hope that this “may alleviate the severity of the economic situation and the ongoing struggle over the executive authority, while also providing a more stable environment for a democratic transformation.”