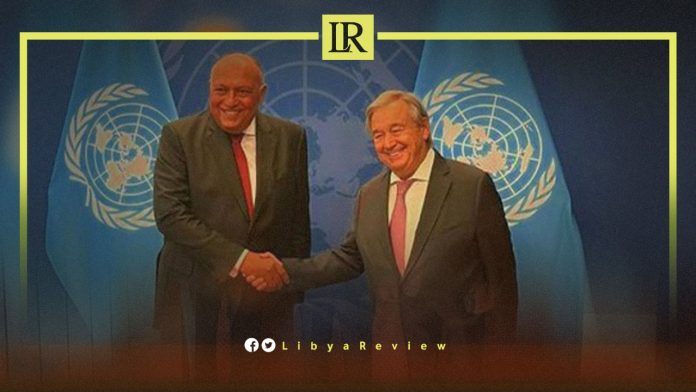 These remarks came during a meeting on Tuesday with UN Secretary-General, António Guterres at the end of his participation in the high-level meetings of the 77th session of the United Nations General Assembly.

Shoukry also reaffirmed Egypt’s commitment to supporting the Libyan people’s quest for elections, “as it is the only way out of the decade-long crisis.”

He also added that Egypt will “not spare any effort to achieve national reconciliation in Libya,” stressing the importance of “maintaining Libya’s unity and encouraging dialogue between all rivals.”

The FM hailed the “great efforts exerted by the UN to reach a Libyan-led political solution that results in an end to the political crisis, and the holding of Presidential and Parliamentary elections as soon as possible.”

Libya has been plagued by turmoil and divisions since the 2011 ouster of late ruler Muammar Gaddafi.

UN-sponsored talks between rivals to agree on a constitutional framework for holding the long-awaited elections have been deadlocked.

Libyans are still waiting for elections to take place, in hopes that the vote will contribute to ending years of armed conflict in the oil-rich country.

Guterres, announced the appointment of former Senegalese Minister and UN diplomat, Abdoulaye Bathily, as the new UN Envoy to Libya, after the Security Council gave its approval.

This comes as a cautious calm has settled in the country, after recent clashes in Tripoli left 32 dead and 160 wounded.

Following these clashes, Egypt called on “all Libyan parties, national forces, and social components to end the escalation, prioritize the language of dialogue, and avoid violence.”

Cairo has been pushing for a political settlement in Libya for years; the complete disarming of militias, an end to foreign intervention in the country, and the fair distribution of wealth among various regions.