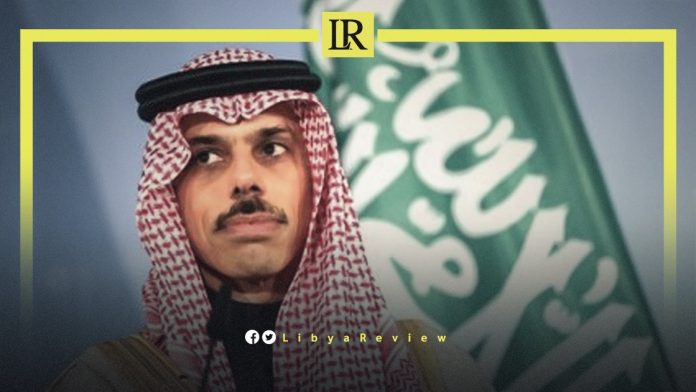 On Wednesday, Saudi Minister of Foreign Affairs, Prince Faisal bin Farhan reaffirmed that the Kingdom “supports Arab solidarity and mechanisms to confront crises in Arab countries, especially with regard to the situation in Libya.”

Addressing the 31st Ordinary Session of the Arab League Summit, he said that “resolving differences in Libya stems from inside, away from external interference.”

The minister underscored the need to “unify Arab positions to end the state of political impasse in Libya,” and pledged to continue providing the necessary support to the country.

Prince Faisal said that “external interventions and militias necessitate concerted efforts to confront them.” While rejecting the “approach of expansion and hegemony at the expense of others,” he emphasized that “others won’t be allowed to impose their values on Arab countries.”

Notably, the Arab League summit concluded yesterday with the adoption of the Algiers Declaration, which calls for joint action to tackle regional and global challenges.

The declaration warned of the risks brought by the evolving international situation posed to Arab national security and stability. It also stressed the importance of unifying efforts, to preserve shared Arab interests.

It also called for cooperation in ensuring food and energy security, confronting climate change, as well as ending the crises in some Arab countries.

According to the declaration, Arab leaders vowed to undertake all efforts to end the crisis through an inter-Libyan process, in accordance with United Nations resolutions, and with respect to Libya’s unity, stability, and sovereignty.

They also reiterated their full support for the establishment of an independent state of Palestine based on the 1967 borders with East Jerusalem as its capital. As well as urging Israel to halt its attacks against Palestinians, and end its blockade on the Gaza Strip.

The declaration suggested that Arab states should play a key role in settling the Syrian crisis, while addressing the country’s political, security, humanitarian, and economic challenges.

The leaders further expressed support for the incumbent government in Yemen, and commitment to extending the truce. They also agreed to work on establishing a nuclear and weapons of mass destruction free zone in the Middle East, as part of the Treaty on the Non-Proliferation of Nuclear Weapons.

The two-day summit was the first meeting of the regional body since the outbreak of the COVID-19 pandemic.