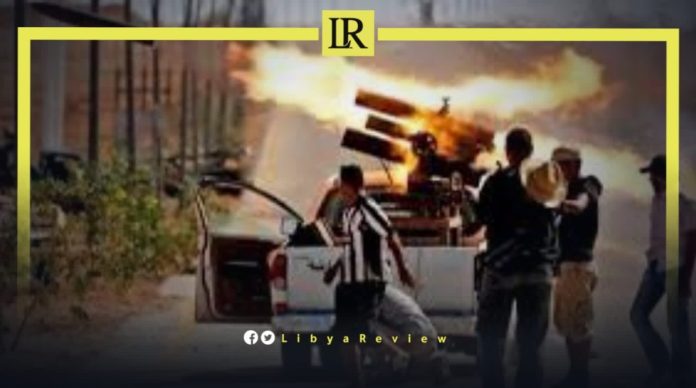 On Friday, Libyan media sources reported that two people were killed and several wounded, as a result of clashes between militias in Sabratha, western Libya.

The Emergency and Ambulance Service confirmed the death of two people in the violent clashes.
Media sources reported that the Libyan Red Crescent has withdrawn families caught in the clashes in the city center.

The Coastal Road has been closed due to the fighting.

The Endowments Office in Sabratha announced that Friday prayers will not be held in Sabratha’s Al-Atiq and Al-Mujahideen mosques.

Safety in Libya’s capital, Tripoli is continuously deteriorating, with threats of kidnapping and murder a daily occurrence for residents.

In November, a stray bullet killed, Mohannad Mohamed Belaid while he sat in his car, in the Noflieen area of Tripoli. The origins of the bullet are unknown, but reports and eyewitnesses claim that the shooting came from the Camp 77 military base.

The situation in other cities is not much different. In Al-Zawiya, two young men, Ali Al-Triki and Munzer Hammad were murdered in the Al-Mutrad area, west of the city.

Over the years, kidnappings, arrests, and assassinations have increased substantially in western Libya. This is evident in the repeated statements of the Ministry of Interior, about the arrest of gangs and individuals involved in the kidnapping and extortion of expatriate workers.

In late October, the Head of the Zaher Al-Jabal Police Station, Abdel-Salam Abdullah Abdel-Nabi, was assassinated by unknown assailants. Just days before, a policeman was assassinated in the same city. Despite this happening in full view of everyone, those at the helm of power do not move a finger to identify the perpetrators. The security authorities do not move to arrest them, or announce their names.

In October, Salah Abdel-Salam, the former Executive Director of the Civil Society Commission of the Libyan Presidential Council, was kidnapped in central Tripoli.

The National Commission for Human Rights in Libya (NCHRL) said that there are reports of security forces being involved in the kidnapping of Abdel-Salam. There has been no contact with him since the incident, and the identity of the security agency that kidnapped him has not been established. So far, his fate remains unknown.

In its latest report on Libya, the foundation based its indicators on several factors, most notably human trafficking, money laundering, drug trafficking, crimes related to animal and plant life, human smuggling, and arms trade.

According to the report, Libya ranked last in the world in terms of the degree of resilience against organised crime. This reflects the inability of the state to confront the scourge of crime.

Murder has been a weekly occurrence, throughout the country. The number of extrajudicial killings in 2022 has surpassed 173 people. This is especially due to the proliferation of weapons and the inability of security services to monopolise the possession of weapons.

Libya ranked first in North Africa, third in the Arab world after Syria and Somalia, and 25th in the world according to the crime index of the database encyclopaedia, Numbeo.