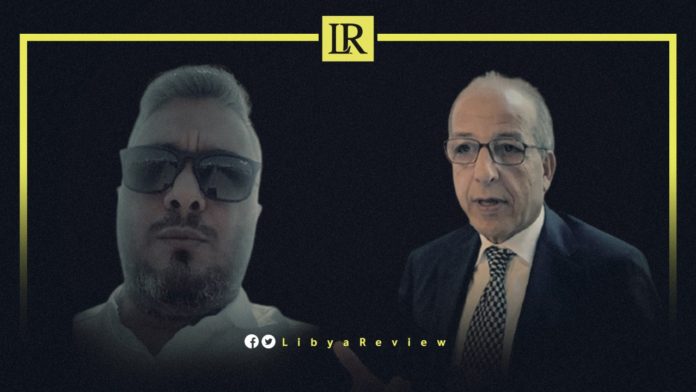 On Saturday morning, an armed group arrested the Libyan journalist Ahmed Al-Senussi after he appeared in a live broadcast on his Facebook account in front of the Central Bank in Tripoli. In this broadcast he called upon his followers to postpone the demonstration without giving reasons.

Some believe that Al-Senussi postponed the date of the protest due to the absence of demonstrators, as he appeared alone in the live broadcast.

An hour after his broadcast, Al-Senussi wrote a short Facebook post stating that he was being held by the security forces protecting the Central Bank of Libya. Two hours later, Al-Senussi posted, “I am with Mr. Lotfi Al-Ahrari, and we are discussing some matters.”

He added that, “the issue is only talks, coffee and smoke,” which caused a wave of ridicule among his followers’ comments. Al-Senussi was released after his arrest for a few hours, confirming this in the evening of the same day in a Facebook post.

Al-Ahrari, a leader in the Abu Salim armed group, has held the position of head of internal security since the end of last year after being assigned directly by former Prime Minister, Fayez al-Sarraj to the post.

The central bank is under the protection of an armed force called RADA Special Deterrence Forces with Islamic orientations. This force utilises Mitiga Military Airport as its base location, in addition to its prison. RADA says that it is affiliated with the Ministry of Interior, but its members wear military uniforms.

Two days ago, Al-Senussi, who is close to the businessman, Husni Bey, owner of the HB Trading Group Corp, posted on his page, calling on his followers to demonstrate on July 31st in front of the Central Bank of Libya building “in order to distribute our money equally.”

He also called on his followers, who number more than 100,000 on his Facebook page, “to save our banking system and avoid political division again.”

“It is not reasonable for the country’s rich to buy 1$ US dollar for 4.48 Libyan dinars and the poor for more than 5 Libyan dinars,” Al-Senussi said. He also presents the program, Our Money, on his YouTube channel where he discusses issues related to the financial and economic situation in Libya.

Two days ago, the Libyan boxer, Malik Zinad, who was funded by the HB group in some fights, demanded “the expulsion of Siddiq Al-Kabeer” the Governor of the Central Bank because of poor living conditions. Zinad deleted the post after several comments criticised his interference in politics.

In March, the meeting of the Board of Directors of the Central Bank, which is divided between East and West in the country, concluded that the exchange rate of the dinar was adjusted by 4.48 Libyan dinars for only 1$ US dollar .

The depreciation of the Libyan dinar is the result of chaos, political division and the absolute power of armed groups since the fall of the regime of the late leader Moammar Gaddafi in 2011.

Hard foreign currencies are not available in commercial banks, but in the parallel market, whose daily price is traded in the Al-Mushir Currency and Gold Market in the old city behind the Central Bank building. The price of 1$ US dollar is currently 5 Libyan dinars.

Al-Senussi, who presents himself as a journalist specializing in economics, also called for the opening of clearing not only between East and West but also between commercial banks inside Tripoli.

Al-Senussi was one of the clients of a private trading company owned by Mustafa Shaqlouf and is under arrest by the RADA Force.

Businessman Husni Bey agreed in a live broadcast as well with Al-Senussi, saying that “stopping the clearing is harmful to the citizen and the country and it is a disaster,” and “I agree with my friend and comrade, Al-Senussi.”

Libya, a member of the Organization of the Petroleum Exporting Countries (OPEC), lives in fragile economic conditions that have reached the point of delaying basic pensions for more than three months, lack of liquidity, halting development projects and lack of economic diversification.

In August of 2020, the armed group Al-Nawasi fired on young demonstrators in the centre of Tripoli who were calling for the departure of Governor Siddiq Al-Kabir against the background of the deteriorating living conditions.

Al-Kabir, who is close to the Muslim Brotherhood, was appointed Governor of the Central Bank in October 2011 and is still in his position despite several calls for his removal. The last of which was when the Libyan Parliament appointed Mohamed Shoukry in his place at the beginning of 2018. However the decision was not implemented until now because of the division and the control of armed groups, which is close to Al-Kabir.