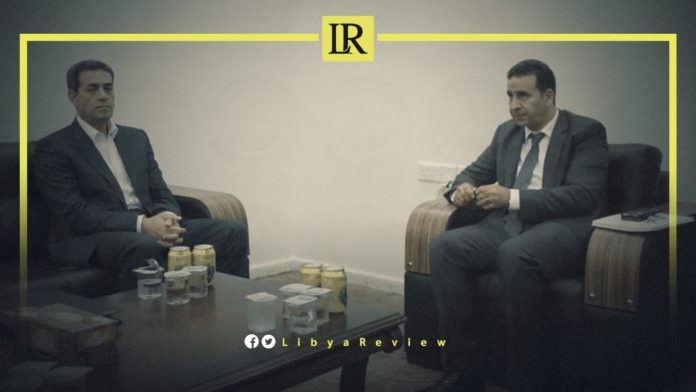 The First Deputy Speaker of the Libyan Parliament, Fawzi Al-Nuwairi met with the Head of the High National Electoral Commission (HNEC), Emad Al-Din Al-Sayeh in Tobruk.

During the meeting, Al-Nuwairi was briefed on the progress being made by HNEC, and its preparations for holding the presidential and parliamentary elections. They also discussed the technical and logistical difficulties facing the commission.

Abdullah Blaiheg, the official Spokesman for the Parliament, stated that Al-Nuwairi affirmed the Parliament’s keenness to hold the presidential and parliamentary elections on time.

He confirmed that the Parliament would be in permanent session until the completion of the electoral process. He added that it was working to facilitate the efforts of HNEC, and to overcome any difficulties that may obstruct the elections.

On Monday, the embassies of France, Germany, Italy, the United Kingdom, and the United States commended Libya for its successful hosting of the 21 October Libya Stabilization Conference.

In a statement, the five countries said that the conference allowed senior officials from countries and organizations around the globe to converge in Tripoli, and demonstrate their support for the sovereignty, independence, territorial integrity, and national unity of Libya.

They also joined the Libyan authorities in rejecting foreign interference in Libyan affairs, including the divisive and destabilizing role played by mercenaries, foreign fighters, and foreign forces.
In addition, the five embassies underscored the need for all parties to adhere to international law.

“We applaud the patriotism and commitment of the 5+5 Joint Military Commission (JMC), which presented on its comprehensive Action Plan for the withdrawal of mercenaries, foreign fighters, and foreign forces from Libyan territory at the October 21 Stabilization Conference,” the statement noted.

“We also committed to cooperating with Libya on important shared challenges such as terrorism, migration, climate change, and protection of the environment. Improved stability in Libya will also lead to increased investment, which in turn creates jobs and improves livelihoods for all Libyans,” they added.