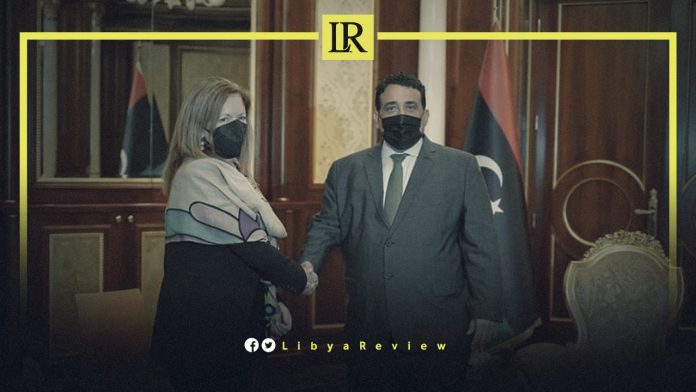 Special Adviser to the United Nations Secretary-General (SASG) for Libya, Stephanie Williams met with the Head of the Libyan Presidential Council, Mohamed Al-Mnifi on Monday.

They discussed the latest developments in the political process in Libya, and arrangements for the upcoming elections.

“The meeting reviewed the efforts of the UN mission in coordinating international efforts to resolve the Libyan crisis, and to cross the transitional phase peacefully. As well as the obstacles facing the upcoming Presidential and Parliamentary elections,” Al-Mnifi’s Media Office said in a statement.

Al-Mnifi affirmed the keenness of the Presidential Council to hold elections, “as it is the only solution to resolve the Libyan crisis.” He reiterated his full support for the High National Elections Commission (HNEC), and pointed to the ongoing work to unify the military institution, state institutions, and the success of the national reconciliation project.

Williams stressed the importance of commitment to the outcomes of the Libyan Political Dialogue Forum (LPDF), holding of the elections, and achieving the aspirations of the Libyan people in building a unified and democratic state.

She praised the efforts of the Presidential Council in unifying state institutions, initiating national reconciliation, and supporting the initiatives of the 5+5 Joint Military Committee (JMC).

In a separate meeting, Williams held a discussion with Foreign Minister, Najla Al-Mangoush who praised William’s efforts to secure the political process in Libya.

Al-Mangoush affirmed the support of the Government of National Unity (GNU) for the electoral process, and its success despite the current difficulties.

In turn, Williams praised the success of the Libya Stabilisation Conference, which was organized by the MFA in Tripoli, on 21 October.

“Williams stressed the importance of joint communication between the United Nations Mission (UNSMIL) and the Libyan Foreign Ministry, in order to achieve the desired goals,” the statement concluded.