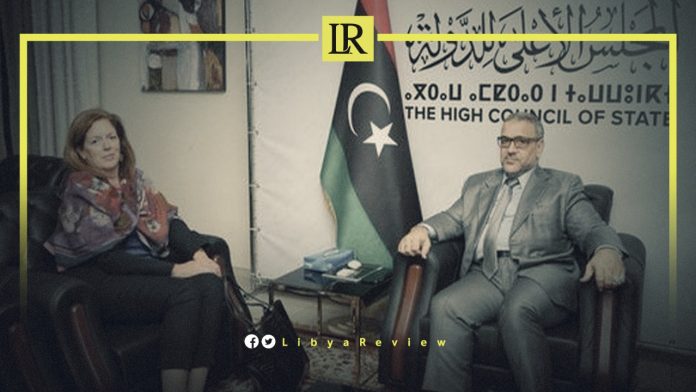 Special Adviser to the United Nations Secretary-General (SASG) for Libya, Stephanie Williams assured the Head of the High Council of State (HCS), Khaled Al-Mishri of the need to respect the Libyan people’s unequivocal demand for fair, free, and credible elections.

According to a statement issued by the HCS, Al-Mishri said that he had predicted the current electoral gridlock. “The reason for the gridlock we have is the defective laws issued by the Parliament, the High National Elections Commission (HNEC), and the Supreme Judicial Council who issued regulations contrary to the legislation regulating the work of the HCS,” Al-Mishri claimed.

“The way out of all this is to find a constitutional basis, and agree on electoral laws,” he noted.

Al-Mishri earlier announced his rejection of the current election laws, and called for the polls to be postponed, “because they represent the point of view of one party and ignore the others.” The HCS presented a proposal to hold the first round of the Presidential elections on 15 February, simultaneously with the Parliamentary elections.

He urged the Libyans not to participate in the elections as voters or candidates. “The electoral process is not only voting, the voting is one of the steps, and there are other steps before voting that begin with the existence of an agreed constitutional rule,” he noted.

According to the agreed-upon roadmap, the Parliamentary elections, originally planned to be held together with the Presidential polls, have been postponed until January 2022.

The final list of Presidential candidates is still pending a week before the vote date, while their electoral campaigns have yet to begin.