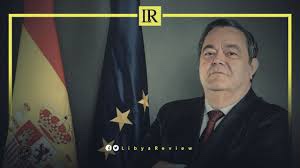 The Spain Ambassador to Libya, Javier Larrache told the economic newspaper “Sada” that there is not much progress in terms of economic cooperation between Libya and Spain. Notably, he confirmed that they are “working with the Spanish-Libyan Chamber of Commerce, which is very active to strengthen economic relations between the two countries.”

Larrache added that there are multi-field cooperation projects with Libya, apart from the supply of foodstuffs and building materials. He noted that there are also projects associated with the National Oil Corporation (NOC), reconstruction, and alternative energies.

He explained that there is no specific time to start these projects, but “I think we will accomplish them in the near future.”

In November, the Ambassador stated that a large number of Spanish companies want to return to Libya to resume their stalled projects.

He pointed out that a number of Spanish companies such as oil giant Repsol have not left the country. As well as adding that “there are other companies that want to return to work in Libya already, or are in the process of doing so,” according to the Libyan News Agency.

The Ambassador stressed that, “any progress in the stability of the Libyan arena will help them a lot to cooperate in promoting this step between the two countries,” noting that Madrid is studying the return of these companies at present.

In August, the Manager of Repsol Libya Branch, Simone Sciamanna met with the NOC Chairman, Mustafa Sanalla to discuss the return of its oil exploration operations in Libya.

Sciamanna explained that the recent stability and security in Libya has encouraged them to resume their activities in the country.

Sciamanna said Repsol was conducting “extensive and serious” studies to transform its El-Sharara operations for solar power generation. He added that the results of studies and evaluations will be presented to the NOC’s Board of Directors upon completion.

“It is important that maintenance operations are carried out for the infrastructure of the El-Sharara oil field, so the company will be able to achieve its goals and advance production in the coming years,” Sciamanna said.