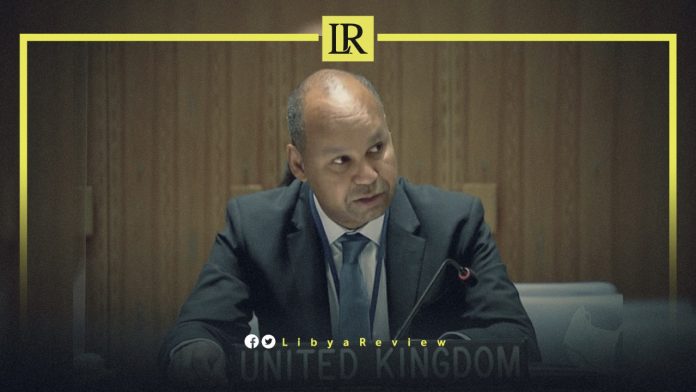 The UK has called for the challenges that prevented the holding of the Libya’s elections on 24 December 2021 to be addressed, and for the momentum that was achieved around the process to be maintained.

In a briefing given to the United Nations session on Libya, UK Deputy Permanent Representative to the UN, James Kariuki said: “Libya is at a critical juncture and the delay to elections planned for last December was disappointing. We must maintain momentum.”

Kariuki reaffirmed the UK’s full support for the UN-facilitated, Libyan-led and owned political process.”Successful free, fair and inclusive elections will continue to be a crucial step in this process. The Libyan people have made clear their aspirations to have a say in who governs them. If we are to move forward and avoid continued delays and uncertainty it is vital that the challenges that prevented elections from going ahead in December are addressed. It is important that we all continue to support the United Nation Support Mission in Libya’s (UNSMIL) work to bring together the political, security, and economic tracks in support of Libya’s stability, sovereignty, and national unity. This is why we have proposed a draft resolution to renew UNSMIL’s mandate,” Kariuki stated.

The UK diplomat noted: “We continue to call for the full, equal, and meaningful inclusion of women and youth in the peace and wider political process. We note that approximately 1 million of the 2.8 million registered voters are female. However, of the 98 individuals who registered to stand in the Presidential Elections planned for last December, just two were women.”

“A process that represents only half the population is not a sustainable or inclusive one. Women must be able to participate as both candidates and voters without fear of reprisals or intimidation. I am grateful to those women who put themselves forward to represent their communities despite these challenges,” he added.

“Finally, it is more important than ever that international actors withdraw all foreign forces and mercenaries from Libya without further delay. We recommend the Joint Military Commission’s (JMC) Action Plan as an important initial step, but it is now incumbent on all to support its implementation. We encourage further progress on a plan to monitor and verify the presence and withdrawal of all foreign forces and mercenaries. As ever, the UK stands ready to work with Libya and our international partners to build a more peaceful, and stable future for the Libyan people,” Kariuki concluded.