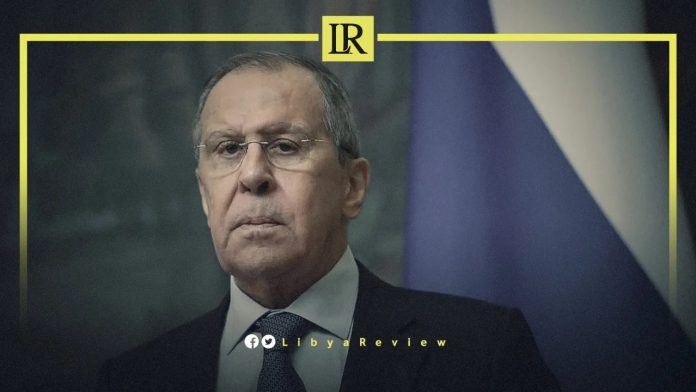 On Friday, the Russian Foreign Minister, Sergei Lavrov, said that the North Atlantic Treaty Organisation (NATO) had destroyed Libya and Iraq under the illusion of democracy.

In a press conference, the BBC correspondent described the Russian Foreign Minister’s speech as containing delusions and aphorisms, saying that the Russian invasion of Ukraine was not a limited military operation, but rather a Russian takeover of all of Ukraine.

The Russian FM responded sarcastically to the journalist’s comment by saying, ”fantastically, we should learn a lot from all the interventions in Yugoslavia, as the West destroyed Libya and Iraq, and all this was in defence of democracy.”

In July 2021, Lavrov accused NATO of destroying the Libyan state due to NATO’s interventions and policies in Libya since 2011. “When NATO intervened in Libya, it contributed to the destruction of the state,” Lavrov told reporters after a meeting with his Turkish counterpart, Mevlut Cavusoglu, in Antalya on Wednesday.
“But now it is necessary to contain all Libyan parties to engage in the political process, including the Libyan National Army (LNA),” Lavrov added.

The Russian Foreign Minister expressed his conviction that the Libyan people should regain control of their own affairs in their country.

Both Foreign Minister’s were keen to focus on the developments of the Libyan crisis. They reviewed the foreign policy initiatives of Moscow and Ankara, regarding a comprehensive settlement in the North-African country.

In January 2022, NATO Secretary-General, Jens Stoltenberg, said that the war waged by Western powers in 2011 in Libya against the forces of the country’s late leader, Moammar Gaddafi, took place at the initiative of the European Union (EU), not NATO.

At the conclusion of a meeting of the Russian-NATO Council in Brussels, Stoltenberg said, “it was first of all an initiative by the EU. Only after a certain time had passed, the European allies requested assistance, and NATO provided support to the allies in operations in Libya.”

From March 19th to October 31st, 2011 the forces of Western countries, with the approval of Resolution 1973 issued by the United Nations (UN) Security Council, carried out a military campaign in Libya under the pretext of ensuring the security of civilians in the hostilities that took place.

The attack played a key role in the overthrow of the Libyan regime and the victory of the rebels near the city of Sirte on October 20th, 2011.

Although the National Transitional Council (NTC) declared the end of the civil war in Libya, the country has entered a period of military and political crisis that continues until now. Russia and China strongly condemned the NATO attack on Libya.