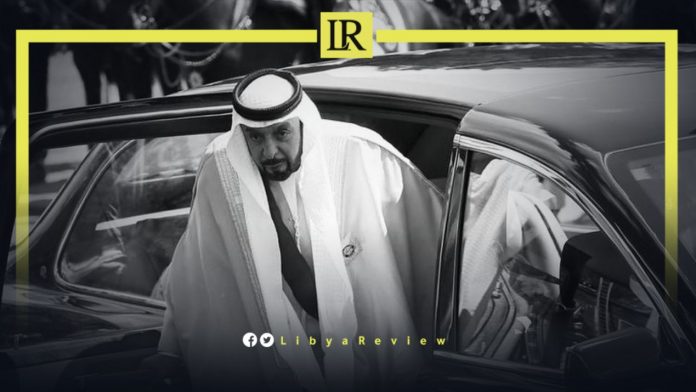 Libyan leaders offered their condolences over the death of UAE President, Sheikh Khalifa bin Zayed Al Nahyan who passed away on Friday, aged 73.

The Libyan Parliament-designated Prime Minister, Fathi Bashagha said in a tweet: “With more sadness and sorrow, we mourn the late Sheikh Khalifa bin Zayed Al Nahyan. My sincere condolences and sympathy to Al Nahyan and the brotherly Emirati people.”

On his part, the General Commander of the Libyan National Army (LNA), Field Marshal Khalifa Haftar also sent his condolences to the government, and the people of the UAE over the death of Sheikh Khalifa.

The Head of the Libyan Presidential Council, Mohamed Al-Mnifi and the Prime Minister of the Government of National Unity (GNU), Abdel-Hamid Dbaiba, in addition to Foreign Minister, Najla Al-Mangoush sent their condolences.

“The Ministry of Presidential Affairs mourns the UAE people, Arab, and Islamic nations and the world over the death of the President, His Highness Sheikh Khalifa bin Zayed Al Nahyan, who passed away on Friday, 13th May, 2022. We wish Allah Almighty grant him eternal peace, and the UAE people patience and solace.”

It added that the UAE will observe a forty-day national mourning with the flag flown at half-mast starting today. Work will be suspended at all ministries, departments, and federal, local, and private entities for three days.

According to CNN, Sheikh Khalifa’s role had been largely ceremonial since he suffered a stroke and underwent surgery in 2014. His brother and Abu Dhabi’s crown prince, Sheikh Mohammed bin Zayed has been widely seen as the de-facto leader of the UAE, handling day-to-day affairs for the Gulf state.

Sheikh Khalifa was appointed as the second President of the UAE in 2004, succeeding his father and founder of the nation, Sheikh Zayed Al Nahyan.

Born in 1948 in the Eastern Region of Abu Dhabi, Sheikh Khalifa was the eldest son of Sheikh Zayed. Prior to his role as President, he was the crown prince of Abu Dhabi and headed Abu Dhabi’s Supreme Petroleum Council, which drafts oil policy.

As President, he headed one of the largest investment funds in the world, the Abu Dhabi Investment Authority, managing hundreds of billions of dollars in assets.

One of the world’s tallest buildings, the Burj Khalifa, took on his name after the UAE government bailed neighbouring Dubai out of its debt. As a sports fan, he supported the acquisition of the English Premier League football club, Manchester City.