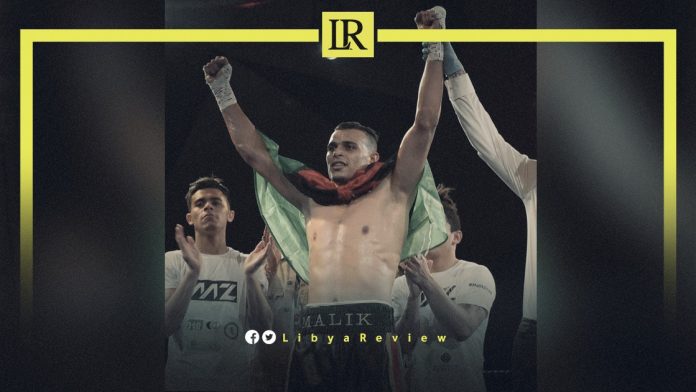 Libyan champion boxer, Malik Zinad also known as “The Trigger” said that his next fight will be in Belgium. He added that this will be his 21st professional fight.

In an interview on the “W sport” talk show program, the Libyan champion explained that the next fight will be on 26 June, with the Argentine champion, Ezequiel Osvaldo Maderna.

The Trigger confirmed that he is “fully prepared for the fight,” and is currently in a closed camp, preparing for the match. Zinad stated that he is “working to make the Libyan fans, and all his supporters happy.”

He pointed out that his opponent has “a high rating, great experience, 35 professional matches in his world record, many titles and belts.” He noted that it “will be one of the strongest and biggest matches in his career.”

Zinad was born on 19 November 1993 in Tripoli, Libya. His father, a former boxer himself, began training him in the sport when he was five, though they practised in the basement of their home due to Muammar Gaddafi’s ban on boxing.

However, Zinad left his country in 2013 due to the unrest following Gaddafi’s death, eventually settling in the island nation of Malta after his father encouraged him to follow his dreams.

He defended the belt three months later, knocking out Beka Aduashvili in the German town of Bielefeld to retain. Zinad won the BBO light heavyweight title on 25 March 2017, stopping Bosnian journeyman Aleksandar Kuvac in just over a minute. He then upset Jermaine Asare two months later, knocking him out in the first round of their fight at the Motorpoint Arena in Cardiff.

Zinad made his London debut on 12 October 2019, dominating Michal Gazdik in two rounds at York Hall.