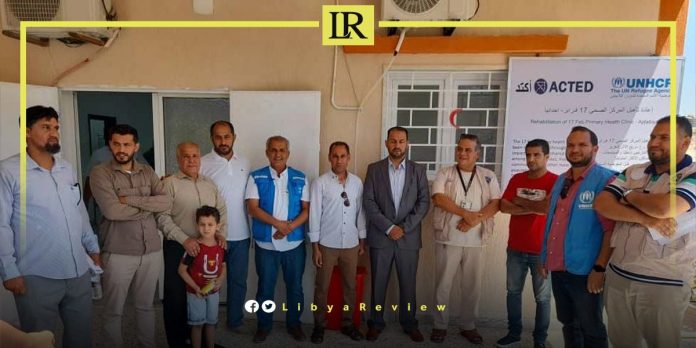 The United Nations High Commissioner for Refugees (UNHCR) announced that it has completed renovation work at the 17 February Primary Health Care Center in Ajdabiya, eastern Libya.

In a tweet, UNHCR added that a ceremony marked the completion of renovation works. “Quick impact projects like these help to strengthen access to basic services & community cohesion in areas affected by displacement,” it said.

In June, UNHCR noted that the 17 February School in the Libyan city of Ghat had completed its renovations. It added that this will ensure a safe learning space for 180 children, including displaced youths and refugees.

UNHCR explained that this work was part of the Blueprint for Joint Action by UNHCR and UNICEF, aimed at strengthening support for children on the move.

It said that 803,000 people in Libya need humanitarian assistance, including displaced people and refugees.

In a report, it stated that among those in need are 168,011 internally displaced persons (IDPs), 661,892 returnees, and more than 42,000 asylum seekers and refugees registered with the UNHCR.

The UN body added that poverty, and a lack of access to livelihoods and basic services, such as health and education, are among the common challenges. Its interventions target the most vulnerable (including shelter rehabilitation, emergency cash, food, hygiene, and non-food items) while strengthening the protective environment, enhancing resilience, and contributing to solutions.

Over the past three years, the organisation announced the completion of 148 fast-track projects, mostly in the health, education, and protection sectors across Libya, spending nearly $7.5 million on these projects.

Each project is identified in consultation with national and local authorities, and the active participation of local communities.