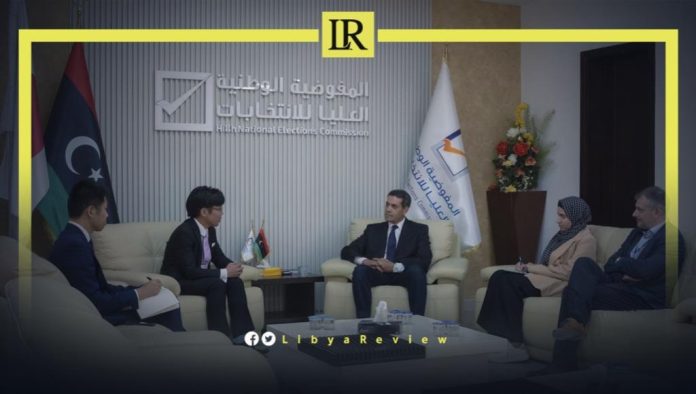 The United Nations Development Programme (UNDP) reported that the Japanese government has funded the procurement of election materials for Libya’s national elections.

It added that the Japanese Charge d’Affaires, Masaki Amadera, met with the Head of the Libyan High National Election Commission (HNEC), Emad Al-Sayeh. Amadera confirmed his country’s support for the HNEC.

The UNDP pointed out its support for Libyan elections along with the HNEC and the United Nations Support Mission in Libya (UNSMIL).

On Friday, the newly appointed United Nations (UN) Special Envoy for Libya, Abdoulaye Bathily, arrived in Tripoli to assume his position as the Head of UNSMIL.

According to a statement issued by UNSMIL, Bathily said that his priority is to identify a consensual pathway towards inclusive and credible national elections. He stressed that elections should be held as soon as possible on a solid constitutional framework.

“Restoring the electoral process will support fostering national unity and stability and renew the legitimacy of institutions in the country,” he affirmed.

Bathily noted that he will lead the UN good offices and mediation efforts to reach a sustainable and peaceful Libyan-led and Libyan-owned solution.

“Over the coming days, I will first and foremost engage with all Libyan parties across the country, including civil society, women, and youth groups, to listen to their views on the political, security, and economic situations and hear their vision about the future of their country,” Bathily added.

He pointed out that the UN remains committed to supporting Libya to hold inclusive presidential and parliamentary elections. “The will of the millions of Libyan people who registered to vote should be respected,” he concluded.

The sources noted that Bathily will also hold talks with the outgoing Prime Minister of the Government of National Unity (GNU), Abdelhamid Al-Dbaiba, and the Presidential Council in Tripoli.

In addition, the UN Special Envoy will conduct meetings with the High Council of State (HCS) and a number of political parties and NGOs.