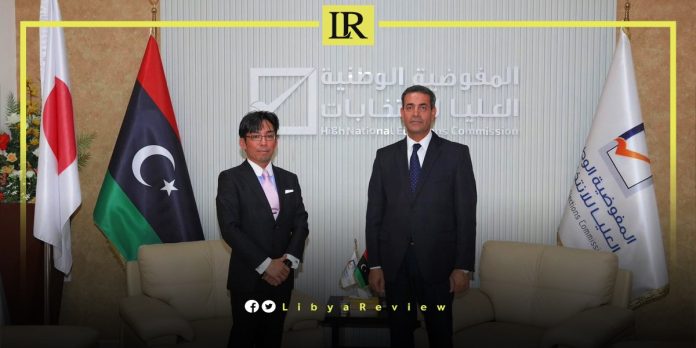 On Wednesday, the Head of the Libyan High National Elections Commission (HNEC), Emad Al-Sayeh received the Chargé d’Affairs of the Japanese Embassy in Tripoli, Masaaki Amadera.

During the meeting, they discussed the latest developments in the electoral process, in accordance with the developments of the Libyan political scene, locally and internationally.

Amadera and his accompanying delegation undertook a tour of some of HNEC’s facilities, to assess its readiness. He affirmed his support for the “choices and aspirations of the Libyan people to cross this stage, and move towards a future of peace and stability.” As well as praising HNEC’s efforts to “achieve free and fair elections that reflect the will of the Libyan voter.”

On Thursday, Al-Sayeh met with the German Special Envoy to Libya, Christian Buck and the German Ambassador to Libya, Michael Ohnmacht

During the meeting, Buck stressed the importance of completing the constitutional basis, and holding Presidential and Parliamentary elections as soon as possible. He also expressed his appreciation for HNEC’s efforts to organise the elections. He also praised the “national efforts that seek to reach a constitutional basis for the long-awaited elections, in order to achieve stability and end the transitional stages.”

The talks “focused on the priority of Libya’s sovereignty, and support for dialogue between the Libyan parties.”

He stressed the importance of the role entrusted to HNEC, underscoring the need to support it fully.