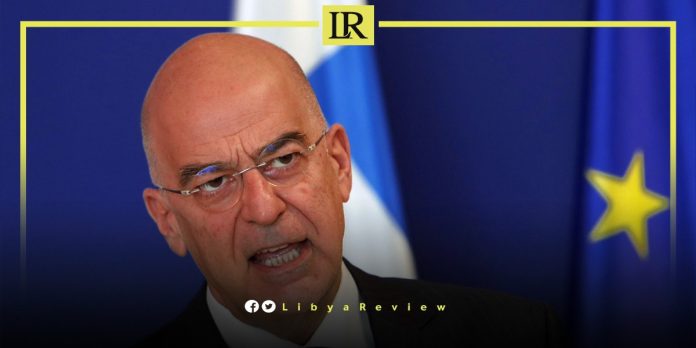 On Monday, Greece’s Foreign Minister, Nikos Dendias said that he intends to brief his EU counterparts on the “illegal, null and void” agreement between Turkey and the Tripoli-based Government of National Unity (GNU), “on the exploitation of maritime zones and their resources.”

In press statements in Luxembourg, Dendias said the controversial deal “creates additional dangers for stability and security in the Mediterranean.”

The FAC meeting is set also to discuss the Russian invasion of Ukraine, and exchange views on current international and regional developments, including Lebanon.

The GNU, led by Abdel-Hamid Dbaiba signed a series of preliminary economic agreements in the hydrocarbon and oil sectors with Turkey.

The deals have deepened the preexisting tensions between Turkey and Greece, which has said that such energy exploration deals infringe on Greek waters.

The Greek FM accused Turkey of trying to “take advantage of the turbulent situation in Libya, in order to further destabilize the Mediterranean region and establish a regional hegemony.”

In 2019, Ankara and the former Tripoli-based government signed a controversial maritime border deal with Turkey. This granted Ankara access to a contested economic zone in the Mediterranean.

Greece condemned the deals, stressing that any measures that aim to implement the agreement are illegal.

At the time, Egypt, Greece, and Cyprus condemned the deal as a stark violation of international maritime laws. They also rejected Turkey’s oil explorations in Cypriot territorial waters, deeming them “unlawful and unacceptable.”

Libyan political forces and numerous countries have denounced the deals signed by Ankara and the GNU. The European Union said the energy deals, “infringe on the sovereign rights of third states and are not in line with the UN Law of the Sea.”