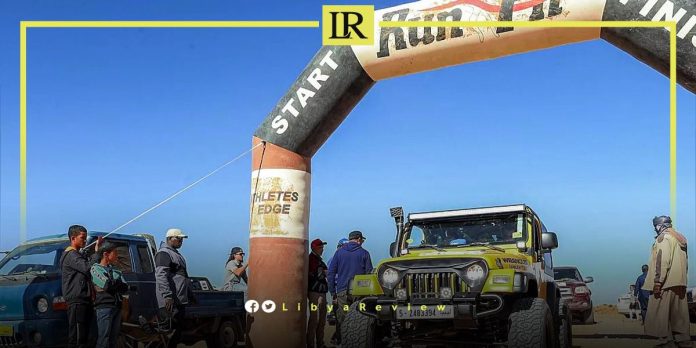 The Al-Hamada desert rally was concluded on Sunday, as various quad bikes, motorcycles, and four-wheel drives participated in the rare event in Libya’s desert, according to Al-Monitor.

At the launch in 2013, organisers of the rally had envisioned an annual event, yet this year’s episode is only the third to be held. Competitors from Libya and Tunisia have taken to the drivers’ seats, including a female for the first time in a Libyan rally.

Organiser, Khaled Drera told Al-Monitor that the contest “sends a message that the country can pull off a great sporting event, far from the politics and divisions that perennially buffet it.”

“Libya wants to progress towards the stability that it deserves”, said Drera, who is also a tour guide, and an expert on the country’s desert landscapes.

The rally’s name stems from the vast territory at the heart of Libya’s portion of the Sahara. A stretch of tranquillity in a nation repeatedly engulfed by chaos, since the fall of Muammar Gaddafi in 2011.

For months now, two rival governments have been vying for power — one based in the capital Tripoli in the country’s west, and the other appointed by the Parliament, based in the east.

Clashes between the two camps have repeatedly shaken Libya this year, notably Tripoli. A confrontation in late August left at least 30 people dead.

After departing Thursday from Zintan, a mountainous small town around 170 kilometres (105 miles) southwest of Tripoli, the competitors have been driving a course that covers more than 400 kilometres of largely flat and stony ground.

The event was held in Ghadames, a UNESCO world heritage site, dubbed the “desert pearl”, near the border with Algeria and Tunisia.

Touting photos of the bikes and four-wheel drives against a backdrop of palm trees and brilliant golden sand, the organisers hoped to attract attention from beyond Libya’s frontiers.