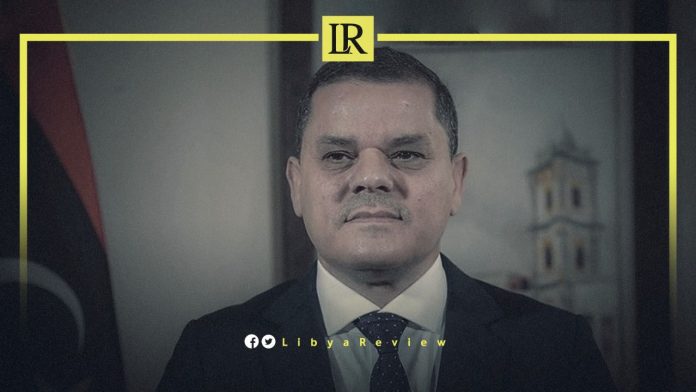 On Monday, Prime Minister of Libya’s Government of National Unity (GNU), Abdel-Hamid Dbaiba stressed that he “will not step down from power until after a constitution is drawn up for the country, even if it takes 30 years.”

Addressing the ‘First National Forum of Al-Mukhtars of Libya,’ Dbaiba said that “Our slogan at the current stage is no wars and no return to fighting again. We have wasted our country’s resources for a cheap price in the past years, although our natural wealth is sufficient to meet all of our people’s demands. We want to reach a consensus over the constitution that will lead to elections, and whoever is elected, we will respect him and hand power over to him.”

The Premier stressed that “there is no way out of the Libyan crisis, except by drafting a constitution approved by Libyans as the main step for elections, even if this takes 10, 15, or 30 years to come true.”

On Sunday, a member of the Libyan Political Dialogue Forum (LPDF), Umm Al-Ezz Al-Farsi said that “the logistical reasons referred to in the statement of the UN mission (UNSMIL) regarding the failure to convene the meeting of the Libyan Parliament, and the High Council of the State (HCS) in Zintan are related to the GNU.”

Al-Farsi explained that the reasons are the “failure of the organisers to obtain the approval of the Dbaiba government to hold the meeting that was scheduled for today in Zintan.”

Notably, the Head of UNSMIL, Aboulaye Bathily said that “for logistical reasons beyond our control, this important meeting for the resumption of the political dialogue between the Parliament, and the HCS cannot take place in Zintan.”

The UN Envoy added that he was “pleased to hear that the Speaker of the Libyan Parliament, Ageela Saleh, and the Head of the HCS, Khaled Al-Mishri had agreed to a meeting under UN auspices, in the city of Zintan, on 4 December. This is with the sole purpose of setting in motion a process towards the holding of elections, including the finalisation of the constitutional basis.

He called on Libyans “from all walks of life and from all regions of Libya, as well as public institutions, including the Presidential Council, Judiciary, and Security Institutions, to make their voices and concerns heard through democratic and transparent procedures in a concerted effort to end the current deadlock.”