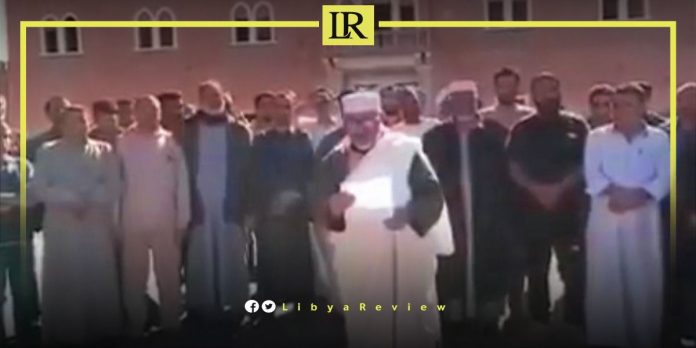 The Libyan tribes of the Fezzan region gave the Prime Minister of the Government of National Unity (GNU), Abdel-Hamid Dbaiba, a 72-hour deadline to release Abdullah Al-Senussi, the Intelligence Chief during the era of late leader Muammar Gaddafi.

The tribes also demanded the “speedy release of Gaddafi’s Director of Internal Security, Abdullah Mansour, and Mansour Daw, the former Commander of the People’s Guard.

In their statement, the tribes referred to the process of handing over citizen Abu Ajila Masoud to US authorities, describing it as “a shame and a clear violation of human rights.”

“The kidnapping of Abu Ajila took place amid complete silence from the Libyan government. Abu Ajila was pardoned by an amnesty law issued by the Libyan Parliament in 2015,” the statement explained.

The tribes called on the competent authorities and the international community to intervene immediately to release the unjustly imprisoned Libyans “before it is too late.”

They threatened that they would “strike with an iron fist,” and gave the government a 72-hour ultimatum to release the prisoners, or else they will “do whatever is necessary to free those prisoners from the tyrannical injustice,” the statement claimed.

On 27 May 2021, the Libyan Supreme Court annulled the 2015 death sentence issued against Al-Senussi, by the Tripoli Criminal Court. It ordered a retrial, alongside that of 37 other officials accused of suppressing the 2011 revolution in Libya.

However, he is still on trial by the International Criminal Court (ICC) for crimes against humanity. He is also a key witness in the illicit campaign financing case of former French President, Nicolas Sarkozy in 2007.

In September, the Magarha tribe and other tribes in southern Libya demanded the Libyan Presidential Council, the GNU, and international organizations release the former Intelligence Chief. This is in order for him to receive treatment, after the deterioration of his health inside prison.

Mansour Daw, received a health pardon, according to an order by the Libyan Minister of Justice, in September 2022.

The Libyan Military Prosecutor’s Office said Minister of Justice, Halima Abdel Rahman ordered the release of Daw on health grounds. He had previously been sentenced to death by a civil court in Misrata, and was imprisoned in the military prison as a military convict.

Over the years, many tribal leaders have called for the release of the remnants of the Gaddafi regime. These demands are always rejected by militia leaders.

Abu Ajila appeared in a US courtroom on Monday, according to a statement issued by the US Department of Justice. US Attorney General, Merrick B. Garland said the “relentless efforts over the past three decades led to the indictment and arrest of Abu Ajila for his alleged role in building the bomb used in the attack.”

Meanwhile, the Libyan Parliament called on the Attorney General, Al-Siddiq Al-Sour to begin criminal proceedings against those involved in the kidnapping and extradition of the Libyan citizen.