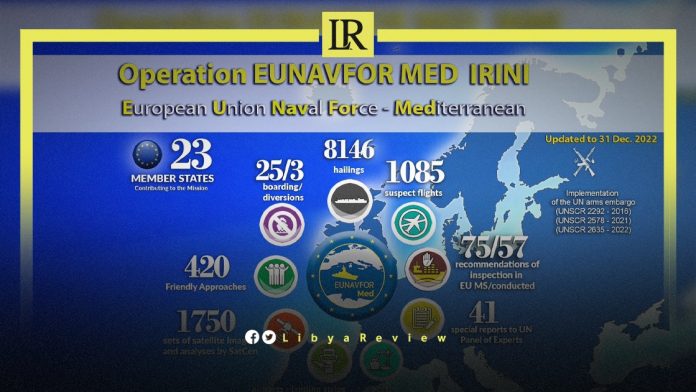 The European Union’s Operation, EUNAVFOR MED IRINI said on Monday that it has monitored 21 flights suspected of violating the UN arms embargo on Libya.

In its December report, IRINI said it has investigated 348 merchant vessels via radio calls, and carried out 12 visits on ships with Masters’ consent.

The Operation also monitored 25 airports and landing strips, in addition to 16 ports and oil terminals. Through the Crime Information Cell, the Operation issued two recommendations for inspection of a suspected vessel in EU Member States’ ports.

After the first Berlin Conference, the EU launched IRINI on 31 March 2020. It is mainly maritime-focused, and tasked with implementing the UN arms embargo on Libya.

“IRINI is part of the European integrated approach to Libya involving political, military, economic, and humanitarian efforts to bring stability and security to the country,” the Operation says on its website.

It focuses on countering illegal arms trafficking, and supporting the implementation of the arms embargo on Libya. It works to gather information on oil smuggling, in particular due to its consequences on the Libyan economy, and its possible use to finance the arms market.

It also contributes to the disruption of the migrant smuggling business model, by collecting information with aerial assets, and sharing them with FRONTEX and relevant national authorities.

On three occasions, IRINI seized cargo assessed to be in violation of the UN arms embargo, and diverted the vessels to an EU Member State port.

Turkish-flagged ships have denied consent to board, and inspect vessels on nine occasions.

The Operation says that its inspections are always carried out in accordance with the relevant UN Security Council Resolutions, and in full respect of international law.