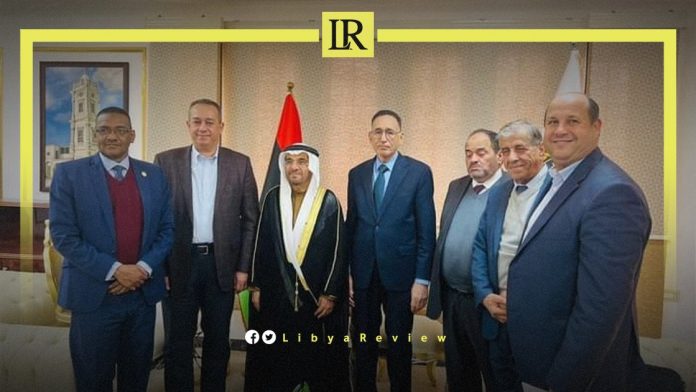 The Libyan Minister of Economy and Trade, Mohamed Al-Hwaij met with the Chairman of the Arab Authority for Agricultural Investment and Development (AAAID), Mohamed Al-Mazrouei. They discussed the possibilities of investment in Libya’s agriculture sector.

Al-Hwaij affirmed the importance of agricultural projects, as a way to develop economic and food security. He pointed to the investment map implemented by the General Authority for Investment Promotion and Privatization Affairs, affiliated with the Ministry of Economy and Trade. This encourages local and foreign investors to find investment opportunities in Libya.

In December 2022, Al-Hwaij said that the Ministry aims to plant 20 million olive trees in various regions of the country. The Ministry recently launched the first national award of its kind for the best olive oil in Libya.

It announced that the Organising Committee of the Award will start receiving olive oil samples on Sunday, and will continue until 12 January. The closing ceremony of the award will be held on 9 February 2023.

“The Award aims to support entrepreneurship in the agricultural sector, enhance its role in diversifying the economy and spatial development, and open new markets for local products,” the Ministry said in a statement on Thursday.

In September, Libyan farmer, Mohamed Al-Futaisi, told the Al-Araby Al-Jadeed newspaper that perennial trees are gradually dying due to drought. Another farmer added that, the drought has led to massive losses in olive trees during the past two years, due to a lack of rain and groundwater.

The Libyan Ministry of Agriculture planned to launch a project to save millions of olive trees by adopting a distillation system. The project was stopped due to a lack of funding, according to Libyan Agricultural expert, Hadi Khalaf.

Khalaf confirmed the need to support farmers, and begin the postponed distillation project, in order to preserve Libya’s olive trees.

In August, the Libyan Centre for Remote Sensing and Space Sciences (LCRSSS) announced that Libya had been exposed to drought during the last three years. It also called for reducing the effects of the drought as soon as possible, and declaring a state of emergency.