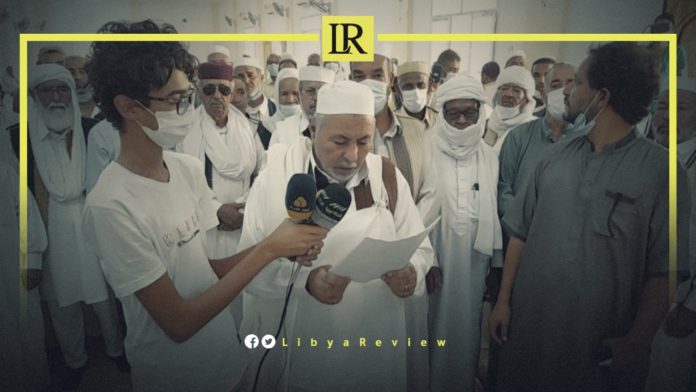 On Monday, several residents of southern Libya gathered in Sebha, and called for the release of supporters of the former regime. In a statement, they urged the Government of National Unity (GNU), the Presidential Council, and the Parliament to release them immediately and without conditions.

On Sunday, notables in southern Libya demanded that the authorities release all political prisoners, including members of the Gaddafi regime.

They also demanded the speedy release of Abdullah Al-Senussi, Head of the Military Intelligence Service during the Gaddafi government.

The notables expressed their complete rejection of the continued detention of prominent figures such as Major General Abdullah Mansour, Major General Mansour Daou, and Ahmed Ibrahim. They explained that the detention of these figures, and other people of the south is a continuation of the policy of “marginalization and exclusion.”

Last week, the Libyan authorities announced the release of Saadi Gaddafi from prison, a source from within the Justice Ministry confirmed on Sunday. He is the third son of former Libyan leader Muammar Gaddafi, who was killed during a 2011 NATO-led uprising.

The Presidential Council announced the release of a number of political prisoners, who have already ended their jail terms, or who had not been judicially convicted

Meanwhile, the National Commission for Human Rights in Libya (NCHRL) praised these releases, and stressed that the decision would help support comprehensive national reconciliation efforts.

In a statement, the committee described this initiative as an important step that promotes the establishment of the principles of justice, the rule of law, and human rights. As well as contributing to achieving comprehensive national and social reconciliation in Libya, while also praising the efforts of the judicial authorities.

The NCHRL also renewed its call for the release of all illegally detained prisoners, including those who have not been charged and those who have already completed their sentences.