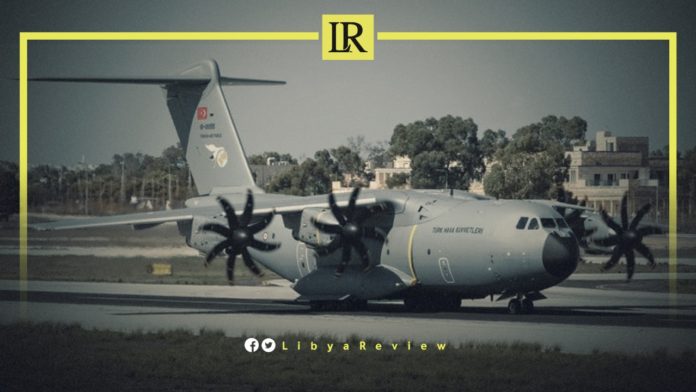 The website confirmed that the two Airbus A400 planes took off from Turkey to the Al-Watiya airbase, and Misrata Airport. The website added that they carried out six consecutive daily flights last week, departing from Ankara.

This is in conjunction with the departure of a private plane belonging to the Turkish intelligence service, from Ankara on Monday morning, on an unannounced flight to Mitiga Airport in Tripoli.

Notably, ItaMilRadar specializes in monitoring aircraft movements over Italy and the Mediterranean.

Turkey continues to transport military supplies to western Libya, despite the fact that the UN-brokered ceasefire agreement stipulates that all military cooperation with foreign nations must be halted.

In May, Turkish Defense Minister, Hulusi Akar stated that the Turkish soldiers and Syrian mercenaries in Libya would remain to preserve Ankara’s interests in Libya.

In April 2019, the Libyan National Army (LNA) led by Khalifa Haftar launched an offensive on Tripoli. The former Tripoli-based Government of National Accord (GNA) requested help from Turkey in November 2019 to avert an LNA takeover. Ankara soon began to airlift thousands of Syrian mercenaries, and an array of weapons to support the GNA.