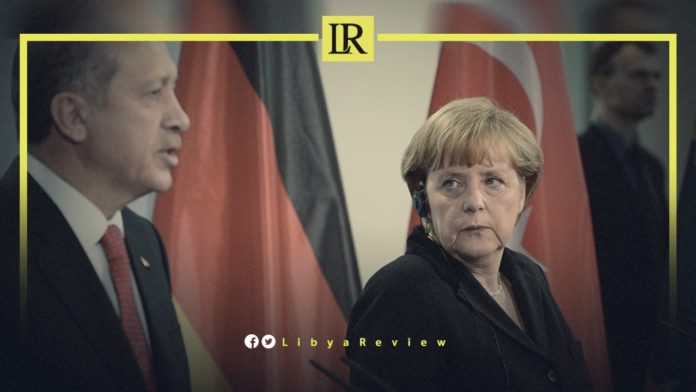 During her meeting with Erdoğan in Istanbul, Merkel said that it is necessary to find solutions to the Libyan conflict and the complete the withdrawal of all foreign forces from Libya.

She stressed the withdrawal of mercenaries from Syria, Libya and others, who must be returned to their countries.

On Saturday morning, Merkel arrived in the Turkish capital, Ankara, at the invitation of the Erdoğan.

Turkey has interfered in Libyan internal affairs. During the past months, it has transferred nearly 20 thousand mercenaries, and is still transferring equipment and weapons to these groups deployed in the western region, in violation of international law.

On Thursday, Libyan Foreign Minister, Najlaa Al-Mangoush paid an official visit to Turkey and met with her Turkish counterpart, Mevlüt Çavuşoğlu, in Ankara.

Çavuşoğlu stated that Turkey supports the upcoming elections being organised in Libya. “We discussed our bilateral relations and the issues on our agenda with our first guest today, Foreign Minister Najla Mangoush of Libya,” Çavuşoğlu tweeted.

“Elections should be held in a free, fair and credible manner,” he said, adding that Turkey will “continue to contribute to the stability and prosperity of Libya.”

In May, Al-Mangoush called on Turkey to take steps to implement the outcomes of the Berlin Conference on Libya, and the relevant United Nations Security Council resolutions. In a joint press conference with Çavuşoğlu, she also called on Turkey to withdraw all foreign forces and mercenaries in the country.

On Wednesday, Al-Mangoush met with her British counterpart, Liz Truss, in London where they discussed Libya’s upcoming elections.

The British Foreign Ministry said in a statement that Libya has promised to hold free, fair, and inclusive elections on the 24th of December. The talks also dealt with the immediate withdrawal of mercenaries and foreign forces.

Furthermore, the British Minister of State for the Middle East and North Africa, James Cleverly, praised the efforts made by the 5 + 5 Libyan Military Commission (JMC) in withdrawing all foreign forces from Libya.

“I welcome the efforts made by the 5+5 JMC in signing an action plan for the removal of mercenaries, foreign fighters and foreign forces from Libya,” Cleverly tweeted.