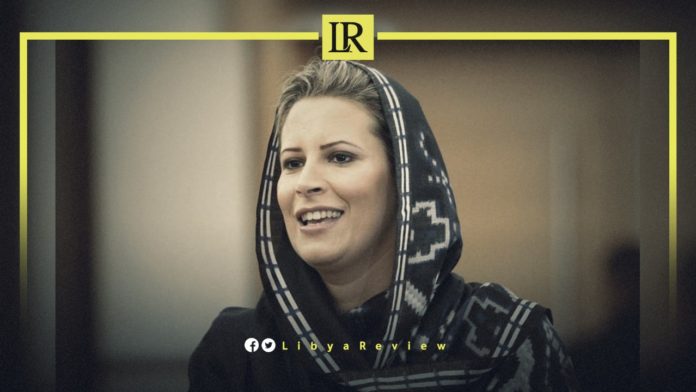 Aisha Gaddafi, daughter of the late Libyan leader Moammar Gaddafi and sister of Saif Al-Islam Gaddafi, candidate for the presidential elections, called on the Libyans to support her brother in the upcoming elections.

Gaddafi’s daughter said, “to the sons of my dear country, to the free women of Libya, mothers, sisters, sisters of the martyrs and men, to whom my father recommended in his testimony, and to all the honorable women of the country. The time has come for the night of humiliation to end in a morning that restores the purity of life and lifts Libya out of the muck of filth and rises again.”

Aisha Moammar Gaddafi added that “history experiences have taught us that the tools of the battles to awaken nations differ according to circumstances, data and variables because nothing is fixed in them except the homeland.”

The daughter of the late Libyan leader Moammar Gaddafi said that, “Saif Al-Islam, who set Libya in mind, refused to leave it despite the offers and temptations that were offered to him throughout these lean years. He preferred Libya, even though death was threatening him.. and conspiracies were being hatched against him by those who did not want the best for Libya. But it was, is, and will remain his only option.”

Notably, Saif Al-Islam, submitted his candidacy papers to the High National Election Commission (HNEC) in order to run for the upcoming presidential elections. These are planned to be held on December 24th.

Last week, Saif Al-Islam appeared inside the headquarters of the HNEC in the southwestern city of Sebha. He was surrounded by some of his supporters, including his lawyer, Khaled Al-Zaydi.