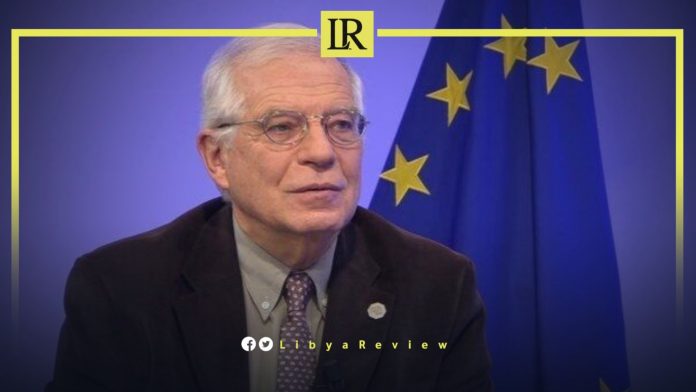 On Saturday, the High Representative of the European Union (EU) for Foreign Affairs and Security Policy, Josep Borrell, called on Turkey to leave Libya as a way to resolve the crisis in the country. He did this in conjunction with the Libyan and international parties’ attempts to work on the exit mechanism for thousands of mercenaries and foreign fighters.

According to the Russian Sputnik news agency, Borrell, during the Mediterranean Dialogue Conference in Rome said, that “there is a lot of interference and external forces in Libya, such as Turkey, and they have to leave the country as part of solving the crisis in Libya.

He added, “currently, we need to hold elections in Libya so that a legitimate government can exist. Without elections, the situation will be a big question mark. We have also sent technical missions and are ready to send a mission to monitor the upcoming elections.”

In a related context, the Head of Mission of the EU Border Assistance Mission (EUBAM) in Libya, Natalina Cea, confirmed the EU’s readiness to facilitate the withdrawal of mercenaries and foreign fighters from Libya.

According to the Italian Nova Agency, Cea added that the EU is ready to do this through a permanent platform for cooperation between the EU missions in Libya, Niger, Mali and Mauritania.

In an intervention during the panel discussion “Governance is in crisis…what future for security sector institutions in the Middle East and North Africa (MENA) region?” within the Mediterranean Forum dialogues, Cea said that the EU is ready to facilitate the withdrawal of mercenaries from Libya through a permanent platform for cooperation between EU missions

She explained that the 5 + 5 Joint Military Committee (JMC), consisting of five officers from the former Government of National Accord (GNA) and the same number from the Libyan National Army (LNA), presented a plan to withdraw mercenaries from Libya, starting with the Sahel countries.

“The committee has requested the support of the EU. We are working on the regional coordination of missions such as those in Libya, Mali, Niger and Chad: we will try to do everything we can with regard to disarmament, demobilization and reintegration,” Cea noted.