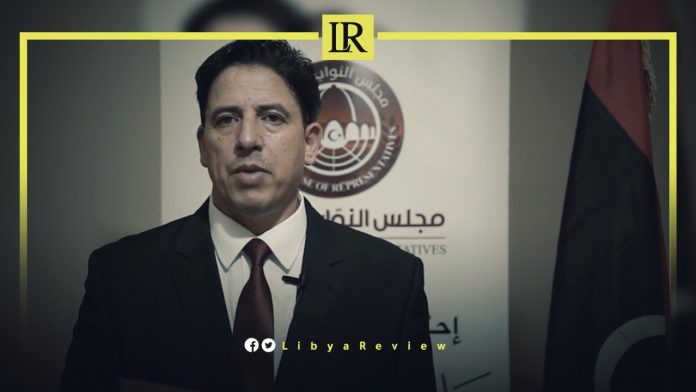 On Saturday, the Head of the Foreign Affairs Committee of the Libyan House of Representatives (HoR), Youssef Al-Agouri, held a virtual meeting with the Chargé d’Affaires of the Greek Embassy in Libya, Ioannis Stamatikos. They discussed ways of strengthening bilateral relations between the two countries.

During the talks, the diplomats also spoke about ways to factilitate travel procedures and open direct flights and navigation routes between the two countries.

On his part, Al-Agouri stressed the commitment of the HoR to the historical and geographical relations between the two countries in all fields. He hailed the important role played by Greece in settling the Libyan crisis.

In turn, the Greek Ambassador affirmed his country’s keenness to strengthen relations with Libya.

The meeting also touched upon the controversial maritime agreement signed by the Libyan former Government of National Accord (GNA) with Turkey. In this regard, Al-Agouri confirmed that the agreement was not referred to by the government, headed by former Prime Minister Fayez Al-Sarraj, to the Parliament for review and discussion.

The Libyan Member of Parliament (MP) reiterated Parliament’s commitment to the national interests of the country, in addition to taking into account the stability of the eastern Mediterranean region.

To conclude, both sides agreed to continue meetings and reciprocal visits for further coordination and discussions on issues of concern to both countries.

In 2019, the GNA and Turkey signed two agreements on military cooperation and maritime boundaries in the Mediterranean Sea. The military agreement aims at ensuring the protection of Turkey’s interests in Libya, strengthening ties between the two countries, and allowing Ankara’s direct intervention in the North African country. It also allowed for Turkish troops to be sent to Libya at the request of the Libyan government.

Last month, the Greek Minister of Foreign Affairs, Nikos Dendias, said that Turkey is the common denominator that threatens the stability in the Eastern Mediterranean region. He accused it of exploiting the migrant crisis as a lever to apply geopolitical pressure.

“Unfortunately the common denominator of many of the challenges that we face in this region…is our neighbor Turkey,” Dendias said at a meeting in Athens with the Foreign Ministers of France, Egypt and Cyprus, Jean-Yves Le Drian, Sameh Shoukry, and Nikos Christodoulides.