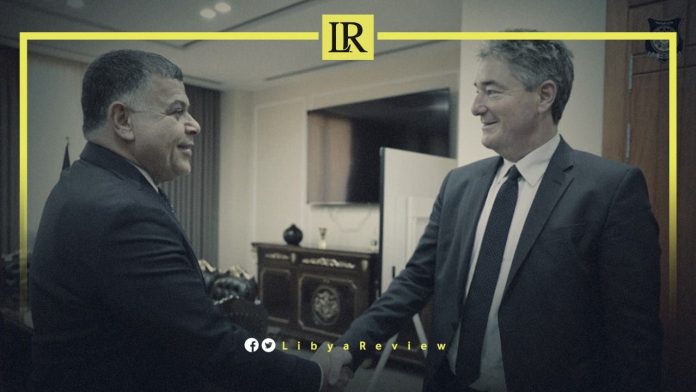 The meeting between the Germany Ambassador and the Libyan interior minister also discussed the issue of training and support for the Criminal Investigation Agency, the Narcotics and Psychotropic Substances Control Service, and the General Administration for the Protection of Diplomatic Missions.

The Libyan interior minister confirmed the development of a roadmap, and the issuance of a joint work matrix to develop human resources and improve the Libyan police’s performance.

He urged the German Ambassador to reopen visa services to Libyans for work, study, treatment, and tourism, as other European Embassies have done.

The German Ambassador stressed the depth of relations between the two countries, expressing his readiness to cooperate and provide support through the German Federal Police.

Recently, the Libyan Minister of Interior, Major General Khaled Mazen held a meeting with the EU Ambassador to Libya, Jose Sabadell in Tripoli. They discussed a strategy of joint cooperation with the European Union.

Libya fell into chaos in 2011 after a NATO-backed uprising, which toppled long-time leader Muammar Gaddafi

According to the International Organization for Migration (IOM), more than 32,425 migrants, including women and children, have been rescued in 2021. Hundreds of others have died or gone missing off the central Mediterranean route last year.

The Libyan country is now a “favourite” departure point for migrants who want to cross the Mediterranean to reach European shores. The country’s notorious migrant shelters are overcrowded, with reports of widespread abuse against those who have been rescued. There are repeated international calls to close down these centers.