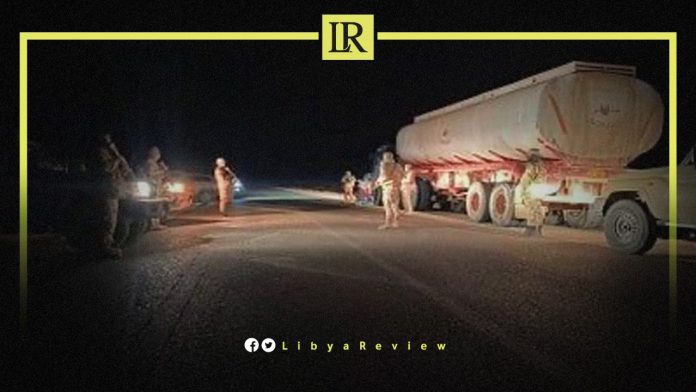 Libyan security forces have seized shipments of smuggled fuel, during desert patrols south of the city of Bani Walid. In a statement, the 444th Brigade warned “smugglers and saboteurs” that it would not hesitate to pursue and apprehend them.

Since mid-February, the Sirte region has witnessed an aggravation of the fuel crisis. This is due to the lack of gasoline at distribution stations operating in the region, resulting in citizens having to queue up for fuel.

In January, Libyan National Army (LNA) forces began “a wide and comprehensive military operation in the south of the country to impose security, the Commander of Southern Operations and the Sebha Military Region, Major General Al-Mabrouk Sahban said.

He added that, the first phase of the military operation will target all violators participating in random construction, drug trafficking, smuggling, illegal immigration, and armed groups.

The second phase is set to target illegal fuel stations, which distribute smuggled fuel at exorbitant prices. The phase will not start until fuel is available at all stations licensed by the Libyan state.

In an interview with Al-Ain News, he added that they are showing great interest in the Murzuq Basin. As several meetings have been held for a comprehensive settlement between the parties of the city.