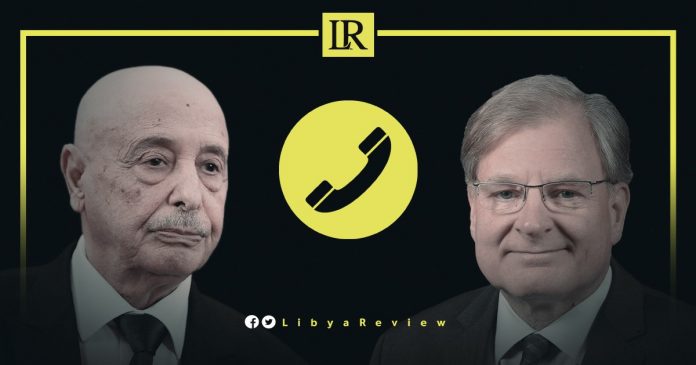 The US Ambassador to Libya, Richard Norland held a telephone call with the Speaker of the Libyan Parliament, Ageela Saleh. He called on Saleh to de-escalate tensions, avoid violence, and restore the momentum for Parliamentary and Presidential elections as soon as possible.

Norland welcomed Saleh’s involvement with the efforts of the United Nations, to reach a speedy agreement on a constitutional basis.

The US ambassador stressed the decisive role of the High National Electoral Commission (HNEC), and urged not to return to the turmoil of the past, according to a statement by the US Embassy in Libya.

Last week, the Libyan Parliament ushered in a new transitional government for the country, headed by Prime Minister, Fathi Bashagha. 92 of the 101 lawmakers in attendance approved the decision, in a live broadcast from the city of Tobruk.

The appointment of Bashagha last month, a former Libyan Interior Minister from the western city of Misrata, is part of a new Parliamentary roadmap. It also involves several constitutional amendments, and for elections to be held in 14 months.

The move deepened divisions among rival factions and raised fears that fighting could return after more than a year and a half of relative calm. Opposing armed groups have been mobilising in Tripoli over recent weeks, as the country’s search for peace and a unified central government remains elusive.