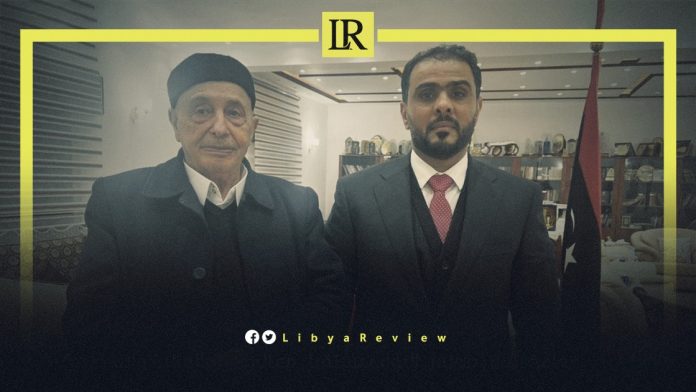 On Sunday, the Speaker of the Libyan House of Representatives (HoR), Ageela Saleh, and the Minister of Finance of the Libyan Government, Osama Hammad, discussed the legal and administrative procedures that were included in the general budget for the year 2022.

During the meeting, Saleh pointed out that the general budget for the year 2022 will include all kinds of support for the High National Election Commission (HNEC) to implement electoral benefits as soon as possible as well as a unified schedule for salaries.

Saleh added that the budget will include support for the National Oil Corporation (NOC) to develop its projects to ensure increased production. It also includes the localisation of treatment in the country.

The new budget included support for hospitals, tumor centres, specialized centres and organ transplantation, and support for health care. The budget also included the implementation of the laws issued by the Parliament that are considered entitlements to the people.

The budget also included the continuation of disbursement of the wife and child allowance as well as continuing to disburse the marriage grant.

Saleh added that the budget will also include supporting fodder to protect livestock. This will occur in addition to applying the laws of the HoR regarding salary increases that were not applied by previous governments and including them in the general budget law for the year 2022.

The Minister of Finance confirmed to Saleh that the draft general budget for the year 2022 will be ready within the next two days.

Recently, the Speaker of the Libyan Parliament, Ageela Saleh confirmed his rejection of the UN’s “interference in the decisions of the Parliament.”

During a meeting with the UN Secretary-General’s Adviser (SASG), Stephanie Williams, Saleh confirmed the legality of the decisions taken by the Parliament.