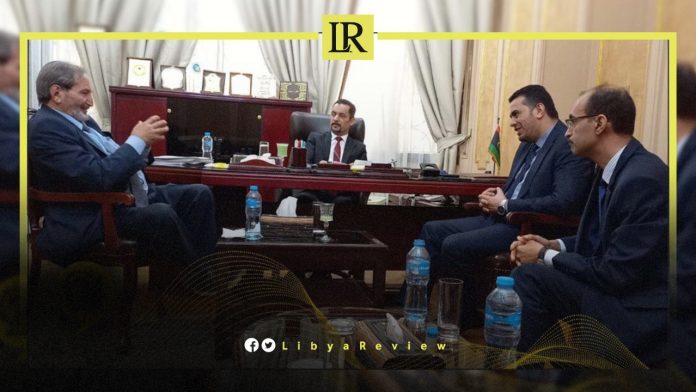 Chargé d’Affairs of the Libyan Embassy in Cairo, Mohamed Abdelali Mesbah received a delegation from the Medical Specialties Council of the Libyan Ministry of Health.

The meeting included Dr. Mohamed Sassi, Chairman of the Council of Medical Specialties, and Dr. Adel Khalifa Salama, the General Rapporteur of exams at the Council. They are visiting Cairo to conclude a cooperation agreement, and exchange experiences with the Egyptian Council of Specialties headed by Dr. Hossam Hosny.

The President of the Alexandria Chamber of Commerce, Ahmed Al-Wakeel explained that the meeting discussed enhancing bilateral cooperation between Egypt and Libya, especially in the field of reconstruction.

Shaarta said that the meeting “confirms the brotherly ties that unite the two peoples.” He stressed the need to increase bilateral economic and trade relations.

“We hope the two parties will be drivers of economic and commercial cooperation between the two countries, and for an integrated strategy to establish a partnership between the institutions of the two cities,” Shaarta added.

He stressed that priority should be given to Egyptian companies, for reconstruction. At the end of the meeting, a partnership agreement was signed between the two chambers to increase economic and commercial relations.

Recently, Egyptian Foreign Minister, Sameh Shoukry said that Cairo “seeks to provide all means of support to the Libyans for dialogue.” He confirmed that an intra-Libyan, and consensual solution is the only way to end the current crisis.