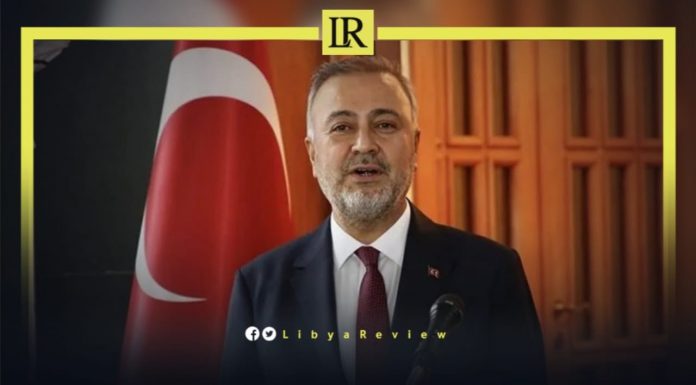 Turkey’s Ambassador to Libya, Kenan Yilmaz said that the Consulate General in Benghazi will reopen if the conditions in the region improve.

This came in a statement he made to the Anadolu Agency, on the sidelines of his participation in the 13th Conference of Turkish Ambassadors held in Ankara.

“Our efforts continue to improve our relations with Libya in all aspects. Our main desire is to overcome this unstable period that Libya is going through, as soon as possible. We recommend removing political differences, achieving reconciliation, and holding elections,” he said.

He pointed out the possibility of Ankara “developing relations in trade, economy, investment, culture, health, and security, in cooperation with a strong government that holds power in Libya.”

The Ambassador stressed the importance of the visit paid by the Speaker of the Libyan Parliament, Ageela Saleh to Ankara, and his meeting with Turkish President Recep Tayyip Erdogan, and his Turkish counterpart, Mustafa Sentop.

Yilmaz indicated that important steps have been taken to improve relations between the Parliament’s of the two countries. He revealed that the members of the Parliamentary Friendship Group headed by Representative, Ahmed Yildiz plan to visit Benghazi.

He added that he met with Saleh in January, and discussed ways to complete the unfinished Turkish projects in eastern Libya.

“Turkish companies in Libya are known as reliable companies. We continue to encourage these companies to come and work there,” he concluded.