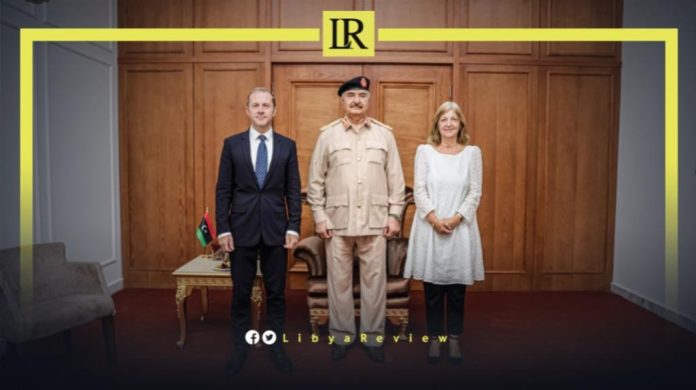 On Sunday, the Commander-in-Chief of the Libyan National Army (LNA), Field Marshal Khalifa Haftar received the Special Envoy of the French President to Libya, Paul Soler.

Their meeting came as part of the “international community’s keenness at this important stage to support efforts aimed at achieving consensus among all parties involved in the electoral process.”

The meeting also dealt with the “political developments of the electoral process, in light of local and international developments.”

In turn, Soler affirmed Paris’ renewed support for the efforts to secure the elections. At the same time, he praised HNEC’s level of preparedness and appreciated the efforts it has undertaken to hold Libya’s much-anticipated elections.

A French court has ruled that Libya’s National Oil Company (NOC) must pay debts accrued during Muammer Gaddafi’s rule to three Swiss companies, according to a report published by the magazine John Afrique.

The court stated that the NOC, which was directly supervised by the Libyan state, was required to pay the companies: Jallouli Communications Group Easy Media, Sismad Travel and Hôpital de La Tour.

The three Swiss companies managed to win the case in the initial phase, paving the way for the recovery of debts owed by the Libyan state.

On 20 May 2021, a judge in the Paris Court authorized each of the Swiss companies to seize shares of the NOC in France.