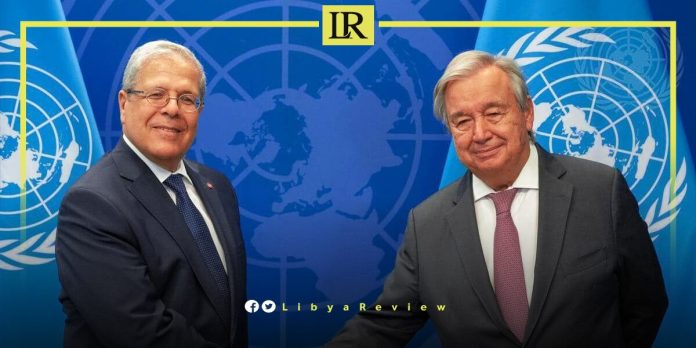 United Nations (UN) Secretary-General, Antonio Guterres held a meeting with Tunisian Foreign Minister, Othman Al-Jerandi. He stated that Tunisia has “no agenda in Libya, except the interests of Libyans.”

During a meeting on the sidelines of their participation in the 77th session of the United Nations General Assembly, Guterres renewed his thanks and appreciation for the support provided by Tunisia to the United Nations Support Mission in Libya (UNSMIL). He also hailed Tunisia’s efforts to reconcile the Libyan parties, and help reach a political settlement to the crisis.

Earlier this month, Tunisian Minister of National Defense, Imad Mamish said that “what is happening in Libya is an internal matter, and Tunisia’s role is limited to helping to achieve stability and nothing else.”

On the sidelines of his supervision of a Tunisian military convoy heading to the Central African Republic, he said: “Everything that happens in Libya is a Libyan affair, and if Tunisia intervenes, it will be in order to help achieve peace in this brotherly country.”

He stressed that Tunisia has a “legal humanitarian” role at the level of international missions. This will contribute and help achieve security and stability in the region, including Libya.

At the end of August, the Tunisian Ministry of Foreign Affairs expressed its deep concern over the “dangerous” developments in Libya, and called on the Libyan parties to exercise restraint, calm, and immediately stop armed escalations.

The Tunisian authorities are monitoring the southeastern border with Libya with great caution. This is following the outbreak of armed confrontations between the conflicting parties in the Libyan capital, Tripoli.

Tunisia called for the voice of wisdom to prevail among all Libyan parties, and for dialogue to be a way to settle differences and advance Libya’s interests in order to preserve its security, stability and unity. It urged Libya to complete its political path and hold elections to put an end to the existing crisis.