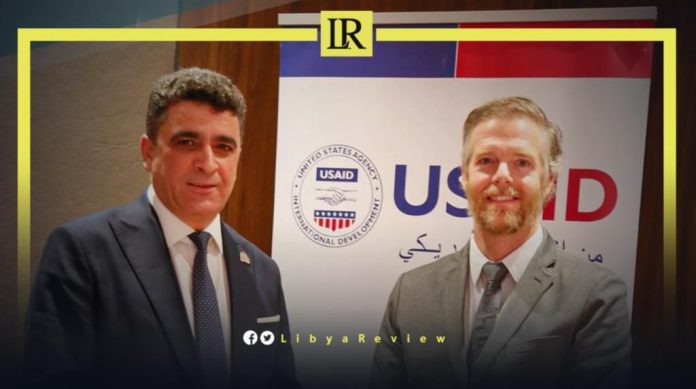 Chargé d’Affairs of the US Embassy in Libya, Leslie Ordman met with Head of the Libyan Audit Bureau (LAB), Khaled Shakshak to discuss the 2021 financial report.

The meeting was attended by a number of economic specialists. They also discussed the partnership program with the United States Agency for International Development (USAID), for the upcoming year.

On Thursday, the US Ambassador and Special Envoy to Libya, Richard Norland and Shakshak launched a training program supported by the International Organization of Supreme Audit Institutions (INTOSAI) for 45 LAP auditors.

Norland praised these “dedicated public servants for their work fighting corruption and increasing transparency,” according to US Embassy in Libya.

Notably, Prime Minister of Libya’s Government of National Unity (GNU), Abdel-Hamid Dbaiba expressed his “reservations on certain observations in the report issued by the Audit Bureau for the year 2021.”

In remarks during a cabinet meeting, Dbaiba said that “these observations are politicized,” claiming that “they were issued by rivals of Libya’s government, especially Audit Bureau Head, Khaled Shakshak.” As he was a candidate in the postponed December Presidential elections.

“Libya’s Audit Bureau’s report regarding the government expenditures has distorted me personally, and all the ministers. But we will say that these observations are true until proven otherwise. We allowed the Audit Bureau to monitor the government’s performance, but this does not mean manipulating the numbers and making shocking reports to the people,” he said.

Among the violations of Libya’s GNU, large sums of money were spent from the emergency expenses band, unrelated to the nature of the account, such as booking travel tickets and hotel accommodation.

The Libya government also directly assigned contractors for development projects, as an alternative to public tenders. This is a clear deviation from the principles of integrity and transparency and is in violation of the organizing regulations and legislation.