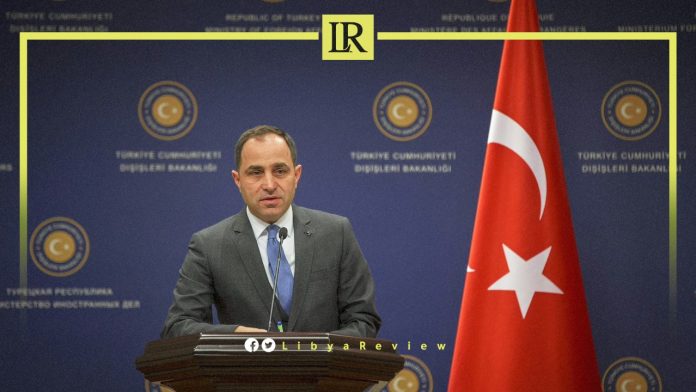 On Tuesday, Turkey’s Foreign Ministry’s Spokesman, Tanju Bilgic stressed the “insignificance of the statements issued by Greece and the European Union regarding the memorandum of understanding in the field of hydrocarbon resources between Turkey and Libya.”

In a statement, Bilgic said that “objecting to this agreement, between two sovereign states contradicts international law and the basic principles of the United Nations.”

“Greece’s efforts, which is trying to usurp the legitimate rights of Turkey and Libya, as well by claiming licensed marine areas, will not yield any results. The European Union’s support for Greece’s extremist demands, and its position that avoids honest dialogue, and obstructs the means to resort to international justice is inconsistent with its own laws and international law,” Bilgic added.

He called on the EU members, “not to exceed their borders and powers and to respect the sovereignty and equality of states in accordance with international law and the principles of the United Nations.”

“The European Union takes note of the reports indicating that Turkey and the Libyan Government of National Unity (GNU) have signed an agreement on hydrocarbons based on the 2019 Turkey-Libya Memorandum of Understanding, on the delimitation of maritime jurisdiction areas in the Mediterranean,” the EU said in a statement on Monday.

Greek Foreign Minister, Nikos Dendias and his Egyptian counterpart, Sameh Shoukry confirmed that the “GNU’s mandate has ended, and it does not have the authority to conclude any international agreements,” the Egyptian Foreign Ministry said in a statement.