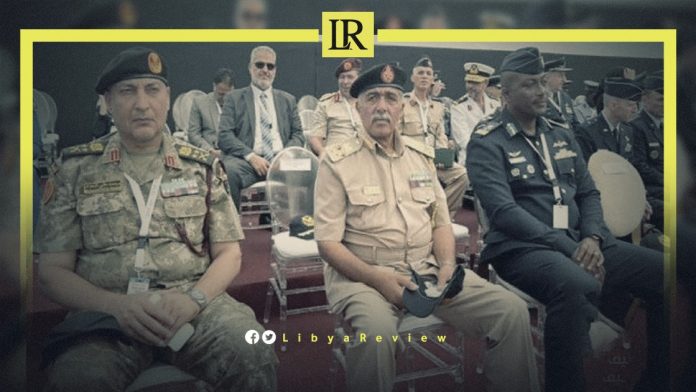 The meeting came as part of their participation in the second edition of the International Aerospace and Defense Exhibition (IADE) in Tunisia.

Libya Military delegations led by chiefs of African air forces and representatives of European, Argentinian, and Australian air forces attended the inauguration ceremony. At least 110 companies from 50 countries took part in the exhibition.

The first IADE was held in the southeastern Tunisian city of Djerba in March 2020, and was attended by more than 100 exhibitors from more than 40 countries.

The meetings were supposed to be completed in Benghazi, but were indefinitely postponed. Libya’s two senior officials met earlier this year at the Mahari Hotel in Sirte.

In January, Lieutenant-General, Khairi Al-Tamimi said that this was a continuation of a previous meeting within the framework of a program to unify the military institution and build confidence between the two parties.

Al-Tamimi added that “this step goes in the right direction.” The Libyan newspaper, Al-Mustaqbal, quoted sources as saying that the meeting discussed the current arrangements for the deportation of foreign fighters.

Libya has two rival armies present in the east and the west. They were engaged in fierce conflict, before signing a UN-brokered ceasefire agreement in October 2020.