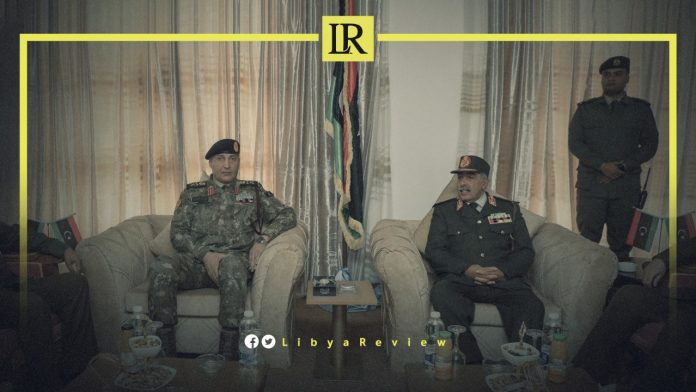 The Chief of Staff of Libya’s Western-based Army, Major General Mohamed Al-Haddad, and the designated Commander in Chief of the Eastern-based Libyan National Army (LNA), Lieutenant-General Abdulrazek Al-Nathouri met in the city of Sirte.

Al-Haddad and Al-Nathouri met inside the Al-Mahari Hotel, which was surrounded by security personnel from all sides. At a time when media professionals and journalists tried to enter the hotel to follow the event, the security forces prevented them from entering and asked them to leave the place.

After the meeting, Al-Nathouri said that his meeting with the Al-Haddad, in Sirte, “was very cordial and our understanding is faster than what the Libyan people expect.” He added, “we, the Libyans, will unify the military establishment without foreign interference.”

He continued, in statements on the sidelines of his meeting with Al-Haddad, that the meeting was Libya – Libya “pure”, and that “all points of view are close.”

He added that other meetings will be held between the two parties in the coming days, while “we are waiting for the 5 + 5 Joint Military Committee (JMC) to join these meetings, which will be consecutive without interference from any foreign party.”

Al-Nathouri indicated that the military institution distances itself from any interactions between the Libyan people or between politicians and parties because its responsibility is to protect the homeland, the constitution and the course of the political process. He pointed out that this institution will not neglect the right of the army, which all successive governments have deprived of its rights 11 years ago.

He said, “these rights are represented in the army’s budgets and the funds allocated for training and the provision of military clothing and supplies in light of these governments’ claims of their desire to rebuild this army, which will not interfere in civilian life but will also not allow civilians to manipulate it and the military institution.”

Al-Nathouri stressed the army’s desire to rebuild the military institution with the aim of protecting the borders. He explained that this will reflect positively on the security of Libya and its neighboring countries. He called on these countries not to interfere in the internal affairs of Libya. This at a time when the institution remains one because the meetings of its unification are very friendly and understanding is achieved through them very quickly.

Notably, Libya is less than a month away from presidential elections seen as crucial to ending its long-running civil war, but deep political divisions could provoke a delay or threaten to renew violence.

Western officials have talked up an United Nations (UN)-led peace process, insisting on “inclusive” and “credible” elections on the 24th of December, despite serious disputes over how they should be held.