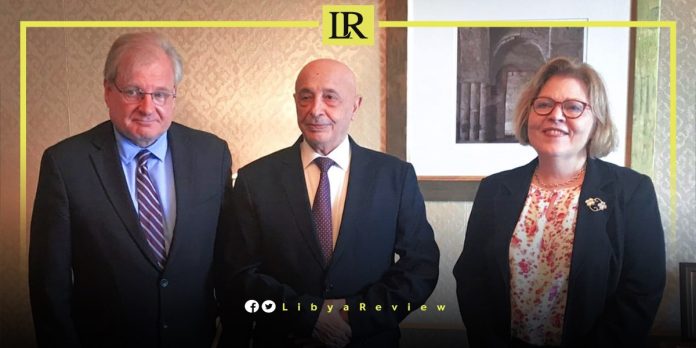 On Friday the United States (US) Ambassador to Libya, Richard Norland met with the Libyan Parliament Speaker, Ageela Saleh.

The US Embassy in Libya tweeted that Norland said that they discussed a constitutional basis for elections, and the transparent management of oil revenues. He noted that the meeting was held in Cairo.

Days ago, Saleh’s Media Adviser, Fathi Al-Marimi said that the “presence of outlaw armed militias and the Head of the Government of National Unity (GNU), Abdel-Hamid Dbaiba are the biggest obstacles, and constitute a force majeure in front of the Presidential and Parliamentary elections in Libya.”

In press statements to the ‘Afrigate News,’ Al-Marimi added that the “lack of comprehensive national reconciliation so far, in addition to the presence of mercenaries and foreign forces is also part of this obstacle.”

He called on the official authorities in Libya to “assume responsibility, disband militias, expel foreign mercenaries and foreign forces from Libya, and launch a comprehensive national reconciliation process.”

Libya’s High Council of State (HCS) has announced that it had adopted a number of articles of the constitutional basis, for the upcoming general elections. These articles had previously been agreed upon between the HCS and the Libyan Parliament.

The current stalemate grew out of the failure to hold elections in December, and the refusal of Prime Minister Dbaiba to step down. In response, the country’s eastern-based Parliament appointed a rival Prime Minister, Fathi Bashagha, who has for months sought to install his government in Tripoli.