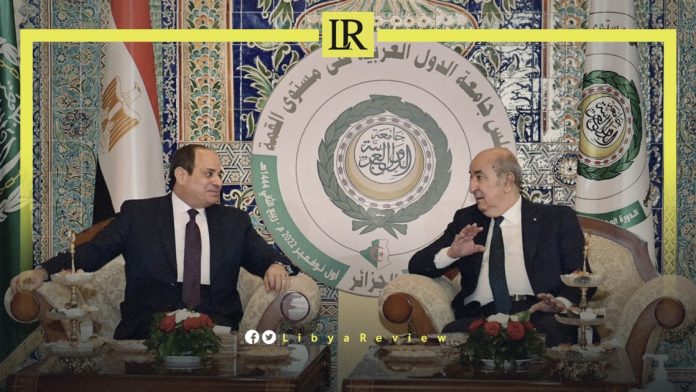 On Wednesday, Egyptian President Abdel-Fatah El-Sisi and his Algerian counterpart, Abdelmadjid Tebboune affirmed the need for to push for Presidential and Parliamentary elections in Libya, as soon as possible.

The two leaders met on the sidelines of the Arab summit in Algeria. They stressed the importance of preserving Libyan institutions, achieving security and stability, and preserving the unity and sovereignty of Libya.

El-Sisi and Tebboune also agreed on the need to strengthen the role of security forces in combating terrorism, and maximising international efforts to expel all foreign forces and mercenaries from Libya.

“The two Presidents agreed on the importance of strengthening cooperation and coordination frameworks between the two brotherly countries regarding the Libyan crisis,” a statement said.

Egyptian officials have repeatedly noted their recognition of the Parliament-designated government as the legitimate government of Libya, and not the Tripoli-based Government of National Unity (GNU) headed by Abdel-Hamid Dbaiba.

Egypt’s Foreign Minister, Sameh Shoukry and his accompanying delegation withdrew from the meeting of the 158th ordinary session of the Arab League held in Cairo in September. This took place when Libyan Foreign Minister, Najla Al-Mangoush began her speech.

On 10 February 2022, the Libyan Parliament announced the unanimous appointment of Fathi Bashagha as the new Prime Minister. But outgoing PM Dbaiba warned that the appointment of a new interim government could lead to war and chaos in the country. He renewed his pledge to only hand power over to an elected government.