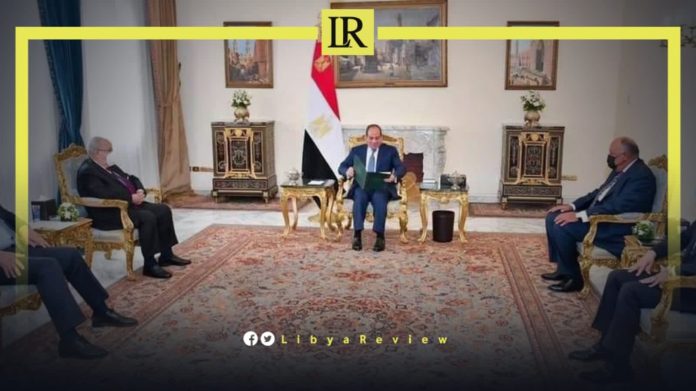 Lamamra delivered a written message from Algerian President, Abdelmadjid Tebboune to El-Sisi. It included his invitation to participate in the upcoming Arab summit hosted by Algeria, in the beginning of November.

Lamamra also confirmed Algeria’s “keenness to strengthen bilateral cooperation frameworks at various levels, launch them to broader horizons, in line with the depth of brotherly bonds between the two countries and peoples.”

On Tuesday, Egypt’s Foreign Minister, Sameh Shoukry and his accompanying delegation withdrew from the meeting of the 158th ordinary session of the Arab League.

This topic was discussed during the consultative meeting of Arab foreign ministers, before the start of the official session. He added that “we have to wait for the outcomes of the Council’s meetings throughout the day in this regard.”

Recently, Egypt welcomed the appointment of Abdoulaye Bathily, as the new Special Representative of the UN Secretary-General to Libya, and Head of the United Nations Support Mission in Libya (UNSMIL).

The Egyptian Foreign Ministry said that “Cairo reiterates its support for the UN efforts to reach a Libyan-Libyan political solution that leads to an end to the political crisis, and to holding Presidential and Parliamentary elections simultaneously as soon as possible.”